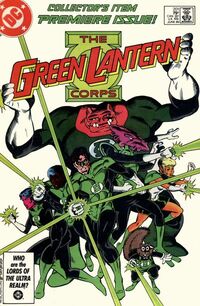 Green Lantern Corps (Volume 1) is a 24 issue ongoing title published by DC Comics from 1986 to 1988. It followed the publication of Green Lantern (Volume 2) #200 and continued the numbering from that volume. All but the final issue were written by Steve Englehart, with the conclusion written by Joey Cavalieri. Contributing pencilers included Joe Staton, Bill Willingham, and Gil Kane.

Corresponding to the change in name, the narrative focus of the book expanded from the then-Green Lantern of Earth (typically Hal Jordan, although both John Stewart and Guy Gardner had featured prominently at various times) to the entirety of the Green Lantern Corps.

Retrieved from "https://dc.fandom.com/wiki/Green_Lantern_Corps_Vol_1?oldid=2651920"
Community content is available under CC-BY-SA unless otherwise noted.