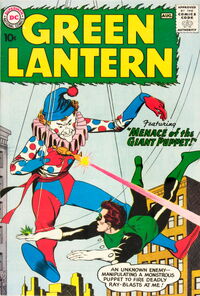 Green Lantern (Volume 2) began publication in August of 1960. The series spotlighted the Silver Age Green Lantern, Hal Jordan and introduced the expansive mythology surrounding Hal's forbearers in the Green Lantern Corps. In April of 1970, Hal began sharing the spotlight with his close friend, Green Arrow, and the title officially changed to Green Lantern & Green Arrow with issue #76. This format continued despite an irregular publishing schedule for several years (with no new issues published at all between #89 in April 1972 and issue #90 in September 1976), but by issue #123, Hal Jordan resumed the sole spotlight and Green Arrow moved on as a backup feature in Detective Comics (Volume 1). Following the double-sized 200th issue, the format changed again, this time altering its title to the Green Lantern Corps (Volume 1), which continued under the same numbering for another 24 issues before being cancelled in 1988. Two Green Lantern specials were published in 1988 and 1989 before the launch of Green Lantern (Volume 3) in 1990.

In 1998, DC jokingly published a "lost" 1963 annual issue. Although it was designed to closely resemble the sort of annual issues published by DC in the 1960s, it was in reality a newly assembled collection of stories initially published in the early years of this volume.

Retrieved from "https://dc.fandom.com/wiki/Green_Lantern_Vol_2?oldid=2561568"
Community content is available under CC-BY-SA unless otherwise noted.