It doesn't matter. It's a power ring. Whatever color... all that matters is what I do with it.

Guy Gardner is the Green Lantern of Sector 2814, after having previously been a Red Lantern of that sector.

Guy Gardner was born into a family of cops in Baltimore, Maryland. He grew up in the shadows, never living up to the hopes of his parents. His brother Gerard was their first-born, and Gloria their princess. He was, as he described it, an "afterthought". Gerard was the star, at school and at sports, and Guy wasn't. The lack of love from his parents made it easier to cope with the death of his mother than the others. It definitely hurt Gerard, who started to take out his pent up anger on Guy. It went on for days, until Gloria intervened and Guy could beat his brother with a baseball bat. He let out all his anger on his brother, and it changed him. However, because he broke his brother's arm and ruled him out for the rest of the football season, his dad, Ebenezer, wasn't too happy with him. Gerard showed remorse.[1] Guy and his siblings joined in the family trade, even after their father, the city's most decorated officer, was forced into retirement after being shot. Ebenezer found solace in the bottle, listening to the police scanner all day.

As a young man, Guy joined the Baltimore Police Department, like the rest of his family. Three years into his career, Officer Gardner shot a suicide bomber before he could get on a plane; the resulting explosion killed ten bystanders. In the aftermath, Guy resigned from the force; this resulted in an even bigger rift between himself and his father.[2]

After his sister's graduation, Gerard tried to get Guy and their father to mend fences with Orioles tickets, but it only made things worse. After the fight, Guy overheard the scanner of Gerard's distress call. As it was just a few blocks out, Guy decided to help his brother, who was being attacked by a gang of drug dealers. Guy charged headlong into them, and somehow made it out alive. He extracted Gerard and his deceased partner, Marcus. Gerard was dying, and Guy, along with driving and shooting at the gang, had to comfort his brother, who felt sorry for being afraid, and for Marcus' young daughter. He made his way to the hospital, but not fast enough. He was found by a Green Lantern Ring, who detected his ability to overcome great fear, and safely dropped his brother off at the hospital.[3]

With the most recent events of Hal Jordan being expelled after killing Krona in the War of the Green Lanterns, Kyle Rayner being a part of an independent group of ring bearers, and John being put on trial for killing another Lantern. It appeared that Guy was the only Green Lantern on Earth that Guardian of the Universe could rely on. However, the Guardians were secretly sabotaging Guy's career after building it up, ensuring there would no further resistance from earth.[3]

The Guardians began their plan when they promoted Gardner to the rank Sentinel Lantern and entrusted him with the mission of guarding a group of ambassadors travelling to a planet for a crucial conference. While Gardner was away from earth on his mission The Guardians would release Guy's old enemy Xar from the Science cells and create the impression that he is going after Guy's family on Earth. As they predicted Guy abandoned his duty and return to Earth to protect his loved ones. When he left Xar attacked the delegations and left no one alive, including the Corps members Guy left in place.[3] 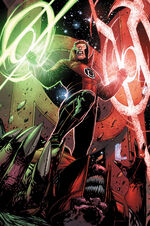 Guy Gardner as an agent of the Red Lantern Corps

After joining with the Green Lanterns to defeat the cosmic terrorist Relic Hal promises to give the Red Lanterns a sector for them to watch over, unfortunately the sector in question was Sector 2814, where Earth resides, giving guardianship of Earth to the Red Lantern Corps .[5]. Guy would also declare that no Green Lantern can enter their sector. As an added term Hal requested that the newest Green Lantern recruit Simon Baz would be stationed on earth to keep an eye on the earth on behalf of Green Lanterns as their ambassador.[3]

"In brightest day, in blackest night,
No evil shall escape my sight.
Let those who worship evil's might,
Beware my power...Green Lantern's light!"

Retrieved from "https://dc.fandom.com/wiki/Guy_Gardner_(Prime_Earth)?oldid=2774871"
Community content is available under CC-BY-SA unless otherwise noted.