This page contains information about Guy Gardner (Volume 1) . Guy Gardner is a 45 issue ongoing series published by DC Comics from October 1992 through July 1996. After its first 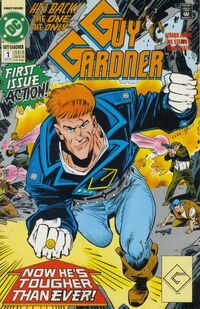 Guy Gardner is a 45 issue ongoing series published by DC Comics from October 1992 through July 1996. After its first sixteen issues, it was retitled Guy Gardner: Warrior for the remainder of its run. The series is a continuation of the limited series Guy Gardner Reborn (Volume 1) and stars former member of the Green Lantern Corps Guy Gardner as he acquires first a new Yellow Power Ring and later develops new powers as he discovers his heritage as a descendant of the alien race of Vuldarians. Following the events of Green Lantern: Emerald Twilight, former Green Lantern Arisia would join the supporting cast, which also included Lady Blackhawk, Tiger Man and Justice Society of America member Wildcat.

After this volume's cancellation, Guy would go on to be a recurring character in Green Lantern (Volume 3) starring Kyle Rayner before returning to prominence as a Green Lantern in Green Lantern: Rebirth in 2006. The next solo series to feature Guy was Guy Gardner: Collateral Damage (Volume 1) in 2007.

The series ran under its original title from October 1992 through January 1994.

Following the change in title, the series continued to run from February 1994 through July 1996.

Retrieved from "https://dc.fandom.com/wiki/Guy_Gardner_Vol_1?oldid=2294585"
Community content is available under CC-BY-SA unless otherwise noted.