H'El is a Kryptonian survivor with the mission to preserve Krypton's legacy in any way possible, no matter how ruthless, making him an enemy of Superman.

On Krypton, H'El believed he was a space explorer working for the great scientists Jor-El and Lara Lor-Van, who he loved dearly as if they were his own parents. Unbeknownst to him, he was actually an illegal clone of several Kryptonians that was raised to believe he was naturally born. Despite his true origin, H'el was raised to despise clones, which were outlawed on Krypton.

When Jor-El became aware of Krypton's impending destruction, he constructed a prototype spaceship for H'El to escape in and tasked him to protect Krypton's history and knowledge among the stars.

However, the journey was a dangerous one. H'El survived many dangers and reached Earth twenty-seven years after Kal-El, the real son of Jor-El, had arrived.[1]

With his mission to preserve Krypton's legacy, H'El studied the other Kryptonians that had come to Earth before engaging them for help. He watched watched Kal-El, Superman's cousing Kara Zor-El, and Superman's Kryptonian-human hybrid clone Kon-El.

H'El at one point blew his cover when he attempted to exterminate Kon-El, identifying that he was not a true Kryptonian but a mere clone before the boy escaped. [2] H'El followed Superboy to New York City where he once again attacked. Though Superboy had the help of the Teen Titans, H'El still bested them and abducted Kon-El, believing he'd prove useful in his ultimate plan for the Earth. [3] 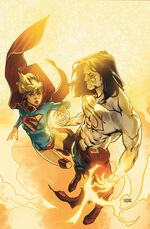 Working with Kara to restore their home

When his analyses were complete, H'El identified that his greatest potential ally was Kara Zor-El, going by the name Supergirl, believing that Kal-El had been too corrupted by Earth's ways to be an asset but was not irredeemable. H'El introduced himself to Supergirl, who was wary but open to his promise of bringing back Krypton, and granted her the ability to speak English.[4]

H'El formally introduced himself to Superman in Metropolis' Centennial Park and attempted to explain his mission to his "little brother". However, Superman refused to believe H'El's story of restoring Krypton. H'El attempted to prove his loyalty to the House of El by executing his prisoner Superboy, an illegitimate member, but he was stopped by Superman before he could go through with it. H'El, disappointed that Kal truly did not share his vision for their planet, escaped to the Fortress of Solitude and reprogrammed it to use as his own.[5] There, H'El worked with Supergirl, who was still on his side, in building the device that would bring Krypton back.

Though he was tricked into thinking Superman had a change of heart, H'El realized the hero's deception and defeated him and the Justice League, just in time to finish his device, which would consume so much energy that it would extinguish the Earth's sun. [6] When Kara had realized the resurrection of Krypton meant the death of Earth, she rebelled against H'El, who forced her to make a choice between the two planets she called home. [7] Supergirl seemingly sided with H'El, lowering his guard long enough to stab him with a piece of Krptonite, finally defeating him.

H'El fell through one of the temporal rifts his machine created, sending him to Krypton several decades in the past, where he was discovered by a young Jor-El.[8] 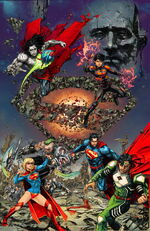 H'El enslaves Krypton in the past

Waking up after six months in a coma, H'El, still stuck in the past, had discovered the truth of his origin - that he was not a true Kryptonian and was actually a clone of several people. Having grown up with so much disdain for clones, H'El's mind snapped, and he changed his goal to conquering Krypton, the planet that lied to him, rather than preserving it. [9] H'El proceeded to enslave the entire planet in the past, destroying anyone who opposed him.

Because of H'El's actions radically changing the past, the Oracle separated H'El's Krypton into a different timeline to preserve the present. The Oracle then summoned Superman, Superboy, and Supergirl to go to H'El's dimension at different points in its history to undo the damage that he had caused.[10]

Through the teamwork of all the heroes and Jor-El, they managed to fix H'El's timeline. In their final confrontation, Superman used his frost breath on H'El's chronal strands - his connection to the timeline - trapping him in a perpetual time loop, an eternal limbo.[11]

Retrieved from "https://dc.fandom.com/wiki/H%27el_(Prime_Earth)?oldid=2776622"
Community content is available under CC-BY-SA unless otherwise noted.