I don't know what I ever saw in that man. When he was gone, I became the woman I was destined to be...a hero!

Harleen Quinzel, better known as Harley Quinn, was the Joker's partner-in-crime and former girlfriend until the madman was killed by Superman. From that day forth, she worked with Bruce Wayne to oppose Superman and became a crime fighter-in-training.

Harleen Quinzel was an intelligent psychiatrist at Arkham Asylum before she was seduced into madness by the Joker, her patient at the time. Becoming "Harley Quinn", the two clowns terrorized Gotham City and found themselves constantly in combat with its protector - Batman.

About four years prior to the Joker's death, Harley became pregnant with the Joker's child and went into hiding for a year. Having a girl, she named her Lucy Quinzel and left the baby with her sister before returning to Gotham, only to discover the Joker hadn't even noticed her absence.[1]

Years later, the Joker set his sights on terrorizing Superman and, with Harley by his side, he used Scarecrow's Fear Toxin to trick the hero into killing Lois Lane and his unborn child. Distraught over what he'd done, Superman killed the Joker in retaliation and began establishing a new fascist Regime.[2] [3]

Superman hired Lobo to capture Harley, but Harley eluded him twice, and finally led him to the Arrowcave where she, Black Canary, Green Arrow, and Speedy defeated Lobo. Harley used her psychiatric ability to determine the cause of Lobo's aggression. She figured that Darkseid belittled Lobo, and suggested that Lobo go back and defeat Darkseid, to which Lobo agreed.[4]

Disillusioned with working so closely with the Insurgency, Harley "went rogue", being a vigilante without a team (much like "ol' Bats") but still considering the Insurgency her allies. She spent her time investigating a Joker-memorial street gang lead by Jason Bard before Superman discovered the gang's existence and slaughtered all 200 of them.[5]

Distraught over the massacre, Harley decided to give up her alias altogether and, after being her own therapist, dyed her hair back to blonde and returned to being "Harleen Quinzel". Not too long after, though, Harleen found herself in the middle of another Joker-themed anti-Regime gang and, deciding they needed a competent leader so they wouldn't be killed like the last group, returned to being Harley Quinn to lead them.[6]

On the night that Batman and Lex Luthor attempted to teleport an alternate reality Justice League to fight the Regime with them, Harley and her gang were requested by Batman to act as a distraction for the Regime, targeting a green pill factory. The attack caught the attention of the new Regime recruit Man-Bat, but Harley successfully defeated him while on half a green pill.[7] Batman and Luthor's mission, too, was a success, and several alternate reality heroes (and a villain) were transported to Earth.

Fall of the Regime

Harley Quinn, now going by the name Harleen, confronts the alternate Joker in Gotham City, believing him to be an impostor, as 'her' Joker was killed by Superman after destroying Metropolis. After a fight between the two, Harleen realizes from the Joker's fighting style that he is the real Joker and is overjoyed to see him.

Harleen takes the Joker to the abandoned Arkham Asylum, hideout of the Joker Clan, a criminal force assembled in the Joker's memory. The Joker is quick to assume control of the Clan, using one of the durability enhancing pills given by Superman to his flunkies on himself. Shortly after this, Regime soldiers lead by Hawkgirl and Nightwing break into the hideout and attack the Clan. As the Joker fights off Hawkgirl and Nightwing, Harleen sends an S.O.S. to Insurgency Batman via a communication device given to her by the Insurgency. The Insurgency forces, consisting of the alternate Wonder Woman, Green Lantern, and Green Arrow, Aquaman, and the native Batman, soon arrive and drive back the Regime. Batman orders Harleen and her men to lay low for the time being and takes the Joker into custody, believing him to be too dangerous to be let loose.

When the Insurgency begins their bid to save the displaced Batman from being executed, Harleen receives orders from the Insurgency Batman to have the Joker Clan occupy as much law-enforcement as they can while they infiltrate Stryker's Island. Harleen complies, but goes against Insurgency Batman's orders and releases the Joker from his cell, although she fears that Batman may be angry with her for doing it.

Harleen and the Joker hijack a Regime vehicle and confront the Insurgency Lex Luthor in Metropolis as he heads to aid the Insurgency against the Regime. The Joker orders Harleen to take down Luthor and take his suit, but she ultimately fails. Fed up with Harleen, the Joker fires her and tries to kill her. However, Luthor intervenes and takes down the Joker in a fight. Enraged by his betrayal, Harleen prepares to kill the Joker with his own knife, but is ultimately convinced by Luthor to let him go, saying she's outgrown him.

In the epilogue, Harleen is shown escorting the Joker at gunpoint to the portal back to his dimension.

"The defeat of Superman filled Harley with confidence. She knew what she was capable of and knew what she wanted. She traveled to the visitors' Earth and freed the Joker from prison. Returning to her world, they married in a ceremony that set Gotham ablaze.

At the reception, the cake-cutting ceremony took a gruesome turn. As her new husband playfully mashed her face into the cake, years of abuse took its toll. Something in Harley snapped. She used the ceremonial knife to slash Joker's throat. 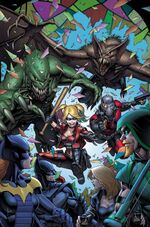 Harley Quinn and the Suicide Squad

After the fall of Superman's regime, Harley was invited by Batman to join him in his reconstruction effort to fix all the worldwide damage Superman had caused, forming a team that would later be called the Justice League Task Force.[8] Of course, Harley accepted but, not long after, she was kidnapped by Amanda Waller and once again forced to join the Suicide Squad. However, not long after that, Waller was murdered by a Batman impostor who commandeered the Suicide Squad for the League of Assassins.

Forced to do the League's bidding or risk having her head explode thanks to a bomb surgically implanted inside her brain, Harley and the Squad were sent to distract a group of heroes by crashing Green Arrow and Black Canary's wedding. The distraction proved successful, and the League managed to kidnap some of the heroes' children - Harley's estranged daughter Lucy as well.

Back at the League's secret base in the Amazon Rainforest, Harley was forced to reveal her true parentage to her daughter before Quinn and the children attempted to make an escape. Thanks to Batman and the children's parents, the rescue was a success, though at the expense of the League of Assassins' endangered animal sanctuary.

The bomb inside her head was later taken out of her.

Harley is given a job by Bruce Wayne, helping operate Brother Eye, a massive satellite monitoring system. Harley, Green Arrow, and Black Canary are assigned to run to Slaughter Swamp, where the society is producing Scarecrow's newest fear toxin. During this, Harley is given a direct cloud of the new formula, courtesy of Dr. Crane, and manages to stand up to a hallucinate variation of The Joker. Due to a misunderstanding, Harley ends up fighting Swamp-Thing and manages to convince him to help against the society. Upon learn the Society is in Gorrilla City, Harley and the others go of to stop them, and learn of Brainiac.

While trying to stop Brainiac, Batman assigns Catwoman, Cyborg, and Harley to reboot Brother Eye, so they can restore communications. However Harley is then hit by Poison Ivy's pheromones, forcing her to fight a hero of the player's choice.

After Wonder Woman defeats Cheetah, Supergirl is greeted by Harley and tries to stop Diana from killing Barbara, per Batman's orders. While Wonder Woman questions her, questioning the amount of blood on Harley's hands. The two fight briefly, ending with Harley being stab through the stomach. It is this act of violence that ultimately opens Kara's eyes to the horrors of Superman. After she defeats Wonder Woman, Supergirl rushes Harley off to a hospital.

"I still can't believe it. Me. Bringing down Brainiac. Who knew? Still, Bats surprised me, offerin' me a spot in the Justice League. Not totally sure he ain't crazy, but who says no to that guy? Y'know, being good feels good. But every now and again, every once in a while, I get this irresistible urge to go out and bash some heads!

Hopefully being good will stick long term. 'Til I'm sure, my kid Lucy's still gonna known me as her crazy Aunt Harleen. Maybe someday I can giver her the real scoop."

Retrieved from "https://dc.fandom.com/wiki/Harleen_Quinzel_(Injustice)?oldid=2851543"
Community content is available under CC-BY-SA unless otherwise noted.