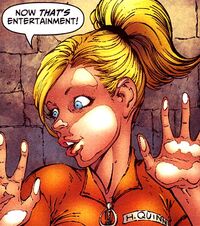 Don'tcha wanna "read" up ya Harley?

Harley Quinn is a former psychiatrist at Arkham Asylum who went mad for the Joker and joined him as his sidekick and girlfriend. Using very colorful outfits, Harley is one of Batman's greatest adversaries and a very dangerous enemy to deal with.

Her gymnastic abilities, endurance and agility make of Harley a formidable opponent while her mental instability makes of her a very unpredictable agent of chaos. All in all, there's no denying that Harley's qualities makes her very alluring.

Retrieved from "https://dc.fandom.com/wiki/Harley_Quinn_Recommended_Reading?oldid=2069484"
Community content is available under CC-BY-SA unless otherwise noted.