It's time to pay the Piper.

Hartley Rathaway was born deaf to incredibly rich parents. After his hearing was medically restored, he was amazed by music and sound. He developed a vast knowledge of sonics, and using this knowledge, fought the Flash as the Pied Piper.

Piper once suffered a nervous breakdown after the Flash apprehended him, so he was sent to Breedmore Mental Hospital to be treated. He apparently improved to the point where they let him use his technical knowledge to fix the hospital's public address system. However, he used this to release hypersonic waves into the hospital, allowing him to escape. However, he was apprehended by someone resembling Reverse-Flash in a matter of minutes.

Piper reformed, however, and, living in New York, put his efforts into helping the homeless. He would go around to stores and restaurants to get food to give homeless citizens every night. One of his many efforts to help the homeless was with Freespace, a squatter's rights group who took over abandoned buildings.[1]

When Wally West decided to move to Keystone City, Piper helped him out. His parents lived in Keystone, and had always tolerated his adventures as an outlaw until one of his more recent doings. However, he had recently received a letter from his mother inviting him back. He took her up on the offer, only to find that his family was being held hostage by some men who had been hired by the Turtle to recover an account book his father had hoped to use to settle some money problems. However, Piper defeated the Turtle's men and redeemed himself in the eyes of his parents.[2] He decided to stay in Keystone to help them recover.[3]

Piper, who had since publicly announced his homosexuality, became a great friend of Wally West's, and often contributed to the Flash's escapades with his technical expertise or acting as an informant.

Hartley had been inactive for a long time when he was suddenly contacted by his father, who wanted a favor from him.[4] Some time later, Piper returned to Keystone, unaware that the Central City Police Department was looking to arrest him for the murder of his parents.[5] During a virus outbreak in Iron Heights, Piper helped Flash break into the prison as he was the only inmate to ever escape from the facility.[6]

Later, Piper learned that he was being framed for the murder of his own parents, by the Mirror Master.[7] 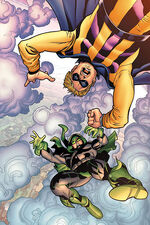 With the loss of his family and the disappearance of Wally and Linda, Piper fell back in with the Rogues.[8] When Inertia gathered them together in a plot to rob the new Flash of his speed, Piper was among their ranks.[9] However, the others were hesitant about including him, considering his past collaboration with the Flash. As a show of faith, he hypnotised a wealthy businessman into wiring his fortune to the Mirror Master and jumping into the ocean. However, he had not entirely abandoned his former ways - the businessman was well-known for taking advantage of the elderly, and after Mirror Master had confirmed the amount in his account, he had it transferred to a charity for homeless children. The Trickster, figuring out Piper's true motives, blackmailed Rathaway into transferring the money to him instead.[10]

Piper attempted to turn the Rogues against Inertia once he realized that he had used them for his own purpose. However, he was unable to distract them from killing the Flash.[11] Knowing that he would be considered just as guilty as the rest of the Rogues, he and the Trickster decided to work together to stay out of sight.[12] Wanting to pay his respects to the fallen speedster, Piper brought a reluctant Trickster to the Flash's funeral. However, after a speech by Wonder Girl stressing the importance of capturing the Rogues, the two fled and decided and go their separate ways. Outside, they were shot by Multiplex and Deadshot.[13]

Ultimately Trickster and Piper were arrested and handcuffed together. However, the two escape. Both Piper and Trickster are then pursued relentlessly by both heroes and villains alike. Eventually the two encountered Piper's former friend of the newly-returned previous Flash, Wally West. Wally confined the two at the Green Arrow/Black Canary wedding, despite the warnings that Deathstroke was planning an all-out assault at the special occasion. The two managed to escape the wedding assault, inadvertently picking up Double Down as a passenger. The trio stopped at a diner, and heard of Double Down's news of both less and well-known villains having disappeared. The three were then attacked by the Suicide Squad. Double Down was captured, but Piper and Trickster, using an invisibility field decided to follow the Squad and free the other captured villains. Once arriving to their destination (Belle Reve) they encountered and freed Two-Face, and then learned from him about the fates of Earth's villain being exiled from the planet. Though Two-Face decided to remain in Belle Reve due to a coin-toss, Trickster and Piper escaped and were again attacked by Deadshot, who pursued them relentlessly until he succeeded in murdering Trickster. With Trickster's death, the cuffs activated a 24-hour self-destruct, which Piper was able to delay with his flute.

When the train they were on was submitted to a border check, Piper fled into the desert. Delirious from the heat, he began to imagine Trickster's corpse talking to him. After severing the hand from the rest of the corpse, Piper was brought to Apokolips by Desaad.[14] Desaad unlocked the shackles, and claimed that Piper could channel the Anti-Life Equation and control the planet. Before the Piper could do so, Brother Eye finished assimilating Apokolips.[15]

Desaad finally got into Brother Eye's control and convinced Piper to play his flute in order to activate the Anti-Life Equation. Piper agreed to play, but upon hearing that Desaad was the mastermind behind his recent misfortune, in an almost successful attempt to break his spirit and take control over him, he killed Desaad with a tune. He played one final time for Brother Eye, a swan song, "The Show Must Go On" by Queen, that blew up the merged entity Brother Eye/Apokolips, with him still trapped inside, apparently left to die.[16] However, he was later seen alive in the streets of Gotham City, saying that if he was allowed to live for some reason, this time he will play on the side of angels.[17]

Piper invaded Keystone City's police precinct, and picked up Trickster's will, which was actually a fake that contained information on the other Rogues, written in invisible ink. He then surprised the Rogues, Zoom, and Kid Zoom. Immobilizing them before he was stabbed from behind in the shoulder by Libra. Although wounded, Piper was able to contribute in the killing of Inertia, by holding him in place for the Rogues with his flute. Piper was later mentioned to have turned himself in to the Central City Police Department.[18]

Retrieved from "https://dc.fandom.com/wiki/Hartley_Rathaway_(New_Earth)?oldid=2743720"
Community content is available under CC-BY-SA unless otherwise noted.