This may not be a great time to say it, kid -- but you're under arrest.

Harvey Bullock is perhaps the most controversial police officer in the Gotham City Police Department.

His colleagues in the Major Crimes Unit will swear up and down that he is a good cop, despite his reputation for taking bribes, police brutality,[2] and ties to organized crime. Bullock has also been one of Batman's biggest foes on the GCPD but has not gone to the extremes that others have to apprehend the vigilante. His partner on the GCPD was Renée Montoya, until Bullock resigned, following an internal investigation.

Lieutenant Bullock was a rough police officer with little respect for vigilantes like Batman.[3] For his attitude and behavior, Bullock was suspended by Commissioner Gordon, but much later, he was reinstated by Mayor Hill as "Sergeant Harvey Bullock," and he became Gordon's assistant.[4] After capturing Savage Skull, Bullock managed to outperform Gordon in his duties as commissioner, which was Hill's plan all along to make Gordon look bad.[5] Although later efforts failed, Bullock maintained an alliance with Hill.[6]

One of Bullock's ideas was to prank Gordon, which in turn led the old man to have a heart attack.[7] Gordon was hospitalized and fell into a deep coma, which caused Bullock to seriously regret his actions,[8] and stop following Mayor Hill's orders.[9][10] When criminals tried to murder Gordon while he was hospitalized, Bullock organized a SWAT team to rescue Gordon and even summoned Batman to assist them, turning over to the good side of the law.[11]

When Gordon returned to work, Bullock showed true concern, and he started being helpful around the GCPD.[12][13] His efforts, however, were not truly appreciated by Commissioner Gordon, and when a new crime lord appeared in Gotham, Bullock started using his contacts in the underworld to benefit himself.[14] Later, he pretended to join Doctor Fang's gang in order to dismantle it from inside, which proved to be an unnecessary measure once Batman captured the crook.[15] 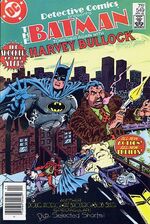 Slowly, Bullock started to earn Gordon's respect,[16] but Bullock's betrayal was not forgotten by Mayor Hill, who hired assassins to murder Bullock.[17][18] After several murder attempts and one injured arm, Bullock was finally able to capture the would-be assassin with help from Batman and Robin.[19] Despite interrogating the crook, they did not learn of Hill's involvement.[20] Eventually, Batman discovered Hill's conspiracy and tried to gather evidence, but Hill outsmarted him by suspending Gordon from the GCPD and declaring Batman a public enemy. Bullock finally deduced the truth, and after another failed murder attempt against him, he killed the assassin and confronted Hill in his own house, causing the corrupt politician to shoot Bullock in "self-defense."[21] Luckily, Bullock was not killed and instead was taken to the hospital where he was protected all day by his friend, James Gordon.[22] After a few days, Bullock was not completely recovered yet, but being a stubborn person, he got back in action.[23]

Later, Bullock teamed-up with Robin, and although he noticed a change in the Boy Wonder from the past to his current partner,[24] they worked fine and captured a couple of crooks including Mirror Master [25] and later his accomplice, Captain Boomerang.[26]

These collaborations with Robin allowed Bullock to deduce that this kid was different from the Robin of previous years, but he came to the wrong conclusion that the new Robin is the biological son of Nocturna because of their proximity.[27] As a result of his new interest in Robin, Batman asked Bullock to help him bring the Boy Wonder closer to his new partner, the Catwoman, and Bullock agreed.[28] Bullock then teamed up with Robin, Batman, and Catwoman to stop the new villain called Film Freak.[29][30][31] Bullock was one of the Batman's associates who were targeted and kidnapped by Ra's al Ghul in the immortal's most ambitious scheme to defeat the Darknight Detective.[32]

For a while, Commissioner Gordon assigned Bullock as the GCPD's official liaison to the Agency, an off-the-books federal organization that was eventually reorganized into Checkmate. Bullock was partnered with a fellow hard-bitten former cop, Harry Stein, and often cooperated with Adrian Chase, the Vigilante.[33][34]

After returning to Gotham, Bullock was assigned to the Major Crimes Unit, and soon he was partnered with a rookie officer, Renee Montoya.

Bullock investigated the murder of the gangster "No-Nose" Novak and later, he received an emergency call. Leading a small group of the GCPD, Bullock reached his destination, but upon arriving, he found several people dead and no clear suspect. However, he did find a Batarang near the crime scene, but he hid it to protect Batman's reputation.[35]

Some time later, Bullock and Montoya were the leaders of a raid that captured the False Face Society,[36] encountered The General's gang on their first criminal attack,[37] and arrested the General's gang with the Major Crimes Unit[38]. They were in charge of questioning one of Cypher's henchmen after his capture,[39] and some time later, Montoya and Bullock informed Commissioner Gordon about the theft of armament from a military precinct, after which, most of the inmates from Arkham were released.[40]

Bullock and Montoya were sent to deal with the hostage situation held by Mr. Zsasz on a girls' school, and they managed to apprehend the serial killer.[41] Bullock threatened Zsasz, and after a while, he approached Batman and remarked how wasted the vigilante looked.[42] When Mayor Krol was kidnapped, Bullock and several other members of the GCPD were lured into a trap in which all the members of the SWAT team were killed.[43] After the unfortunate event, Harvey organized the tactical squad to capture the Riddler, who had hijacked a live TV broadcast. Bullock was successful but largely due to Robin's assistance.[44] A few hours later, Bullock and Montoya went to the Mayor's house looking for clues of his abduction. Bullock was almost killed by an explosive trap, but he was saved by Batman. Learning that Krol had been taken to the Gotham River Tunnel, Bullock and his men travelled to the place, but upon arriving, they were unable to enter as the tunnel had been blocked.[45] Moments later, Bullock and the others located Krol near the edge of the river and acted quick to get him medical attention.[46]

A few hours later, Batman was exposed to the city after his defeat at the hands of Bane. Bullock calmed down Gordon, who was hysterical with the news. Hours later, under Gordon's instructions, Bullock and Montoya delivered a special medicine to Robin and Azrael [47]. Shortly after, Bullock and Montoya investigated the crime scene at the Gotham University, where Scarecrow had killed and kidnapped several students. They played a tape that was addressed to Batman, and they had to be saved by the Dark Knight when the tape was revealed to be an explosive.[48]

After the police arrested Bane's three main accomplices, Bullock and Stan Kitch were in charge of the interrogation, but they failed to get any valuable information from them.[49] After the three crooks escaped from prison, Bullock and Kitch recaptured them, and not long after that, they witnessed the final battle between Batman and Bane, in which Bane was ultimately defeated.[50]

Battle of the Batmen

However, after the new Batman defeated Bane, the GCPD started noticing a sudden change in the vigilante's methods. Bullock and Kitch were the first to find the Tally Man, barely alive after he had been brutalized by Batman.[51] Afterwards, Bullock and the GCPD started a manhunt for the Joker, who was apparently planning to kill Batman,[52] but eventually the police had to save the madman from being killed by the vigilante. While Bullock understood Batman's new approach to crime, he couldn't permit his behavior as a law enforcer.[53] Afterwards, Bullock was tasked to solve a murder by an apparent super-sniper, and he had no choice but to let Batman know about the case.[54] Batman's involvement proved useful when he captured Gunhawk, although with unnecessary violence.[55] However, Bullock learned not to trust the new Batman after he and Montoya found the dead body of Abattoirs's latest victim, whose life could've been saved if Batman hadn't let the criminal die.[56]

"It looks like the costumed geeks are fighting to see who gets to be Gotham's number one masked man."
-- Harvey Bullock

The situation worsened and Bullock and Montoya found more victims of Batman.[57] When the police could no longer work with Batman, Bullock learned that the original Batman had returned as he was the first to witness the comeback and he quickly summoned Commissioner Gordon to the scene.[58] Bullock and Montoya were the first to arrive at the Gotham Bridge, where they were informed of the "Batmen" confrontation,[59] and the next night, they witnessed the return of the original Batman.[60]

After Commissioner James Gordon is shot by an unkown assailant, everyone pitches in to investage and find the culprit. After the culprit is found but no solid evidence can be provided, the Gotham PD has to let him go. Unsatisfied with this, Harvey sets the criminal up to be killed and resigns from the police force after it is discovered.

Following the events of Infinite Crisis, Bullock was back on the force and offered one chance. If he ever made a mistake, he would be fired again. While he was still not a fan of the vigilantes, Bullock assisted Batman and Robin in their investigations. Or at least, did not openly go against them.

Bullock usually helped Commissioner Gordon and gave him advice after Batman's disappearance.[61] Bullock assisted Gordon on the case against Two-Face, but they both failed to capture the villain, who turned out to not even be Two-Face.[62]

Shortly after, Bullock was assigned Jamie Harper as his new partner, and their first case was the beheading of a man, who apparently didn't bleed.[63] More cases like this started to appear across Gotham,[64] and during the third investigation, Bullock finally found some evidence.[65] However, Officer Farelli hid important information from Bullock, making it impossible to find the killer.[66] Shortly after, Bullock was in charge of planning the capture of the several Arkham inmates who were freed by Black Mask. Gordon, Bullock and a tactical team tried to apprehend Mister Freeze but failed and Gordon ended up captured. Bullock organized and planned Gordon's rescue for almost fourteen hours, but in the end, Gordon captured Freeze without help and Bullock returned to his usual activities.[67]

After a short time, Bullock finally gathered enough evidence to link the murders to the priest, Garret Day. Bullock arrested and interrogated the man and learned about the existence of the Order of Purity and their vigilante Azrael. In order to prevent further murders, Bullock placed a bounty reward for the capture of Azrael.[68]

Now partners with Josie MacDonald, Harvey works with the new Batman after a church graveyard is defaced and a priest killed, even covering for the vigilante when Robin goes undercover as a boy wanted by the cult La Saligia. He deduces his former partner, Renée Montoya, is The Question when she appears, commenting that he recognized her "caboose." [69]

Retrieved from "https://dc.fandom.com/wiki/Harvey_Bullock_(New_Earth)?oldid=2743721"
Community content is available under CC-BY-SA unless otherwise noted.