Harvey's the good one. He has to be. Otherwise... what am I?

Harvey Dent is Two-Face, a criminal in Gotham City with a split personality obsessed with the number two. He was formerly the Gotham district attorney and an ally of Batman, before half of his face was scarred by Erin McKillen and he lost his sanity.

As a boy, Harvey Dent grew up in Gotham; his father was a politician. An evil man, Dent's father would gamble, get drunk, and abuse his son constantly, sometimes deciding whether he would beat him or not on the flip of a coin. Some time after the murder of the Waynes, Harvey tied his father up and left him trapped in their house for days until the police finally found him. Harvey was sent to an Arkham boys rehabilitation home upstate where he first met Bruce Wayne, having been sent to the home too to better handle his grief. The boys became good friends but wouldn't realize their identities until years later.[1]

The boys made a pact that someday they'd each kill the other's enemy - Harvey would kill Joe Chill, and Bruce would kill Harvey's father. However, while Harvey was at the home, his father attempted to turn over a new leaf and melted down his coin, reminting it into a coin with only two-heads as a symbol that he would never beat Harvey again. Harvey backed out his deal with Bruce, choosing to give his father a second chance, a choice Bruce found to be incredibly naive.[2]

As a young man, Dent became an incredibly skilled defense attorney for criminals in Gotham and began making a name for himself in the city. Harvey was introduced to his future wife Gilda Gold by Bruce Wayne at one of his parties, who believed that the two would have chemistry.[3]

Some time later after the first appearance of Batman, Harvey and Gilda were married, and Dent had become one of the best defense attorneys in Gotham, having successfully exonerated some of the criminals Batman had caught. Harvey also acted as the lawyer for the McKillen crime family until he began to have doubts about working with such dangerous clientele. Because he felt that Dent's talents could be better applied to the right side of the law, Bruce Wayne suggested Harvey become Gotham's district attorney, to which Dent agreed and he was later awarded the position.[4]

Harvey Dent was a great district attorney, leading a crusade against the filth and corruption in Gotham he had previously defended. Batman, Commissioner Gordon, and Dent worked closely together during Batman's second year in order to dismantle the gangs and organized crime in their city.

Bruce Wayne and Harvey Dent would together attempt to reopen the Arkham rehabilitation home where they first met, but their plan eventually fell apart.[1]

In one of Dent's last cases as district attorney, he lost against a mercenary named Karl Twist due to some GCPD officers misplacing substantial evidence that would have put the man behind bars. This loss would remain as a bitter memory with Dent for years.[5] 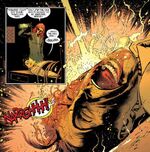 On his last case, Dent and his allies set their sights on the McKillen sisters - Dent's former clients. With Dent taking the lead, he managed to get both the sisters arrested and sent to prison where, before long, they hatched a plan, with one committing suicide and the other, Erin, escaping disguised as the body. Once free, Erin McKillen tracked Dent down, hellbent on revenge. McKillen kidnapped Dent, killed his wife, and, after strapping him down to a table, threw acid on half of his face, scarring his left side irreparably.

After the trauma he had gone through, Dent went insane, developing a second personality for the scarred side of his face, and began basing his decisions off the 50/50 chance of the flip of a coin. Dent's insanity soon lead him to a life of crime, taking on the name "Two-Face" as he fought his former friend Batman.

Some point after he became Two-Face, Dent tracked down his abusive father and had him kept alive, tied up for years, in a hidden location in Reno.[2]

Two-Face would later join the War of Jokes and Riddles, choosing to join the Riddler's army against the Joker. After weeks of fighting, Batman finally managed to contain the fight, and Two-Face was simultaneously apprehended with the rest of Riddler's army.

Sometime after the death of the second Robin Jason Todd, Two-Face, having escaped prison, captured both Batman and Nightwing until he was stopped by the then-untrained Tim Drake; the successful rescue would go on to convince Batman to take Drake as his third Robin.[6]

Years later, Two-Face broke out of prison, having been one of the inmates injected with an experimental Venom being created and tested by Bane. "One-Face", as he called himself in this musclebound state, was soon defeated by Batman and he returned to his normal self.[7]

When the Crime Syndicate arrived on Earth and seemingly killed the Justice League, all the criminals in Arkham were allowed to run rampant in Gotham. Two-Face, using his coin to decide that he should save the city, collected a group of low-ranking criminals in Gotham and herded them to the courthouse, where he played the part of a judge and used the coin to decide their sentences. When his quest for "justice" was interrupted by members of the Secret Society, Two-Face angrily abandoned his mission and joined in the chaos outside instead.[8]

A war for control of the city broke out between the former inmates of Arkham Asylum - led by Scarecrow, and the former inmates of Blackgate Penitentiary - led by Bane. Two-Face joined Arkham's side and participated in the fighting between the two prisons. However, despite the Arkhamites' best efforts, they were defeated by Bane, who declared himself the victor of the Arkham War.[9] 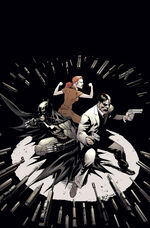 Two-Face vs. Batman vs. Erin McKillen

When the woman who made him Two-Face - Erin McKillen - returned to Gotham, she was quickly detained and caught both Batman and Two-Face's attention. Two-Face, wanting revenge, hired a group of thugs to assassinate her in prison, which failed when McKillen was rescued by Batman and taken to Wayne Manor.[10] When McKillen attempted to flee the country once again, Two-Face made another play for her life, only to be taken by the mob himself.

With McKillen successfully captured and delivered to GCPD, Batman quickly came to Two-Face's rescue as the building he was in was set ablaze. As Batman helped Two-Face out of the burning building, Dent revealed that he had known that Bruce Wayne was Batman the whole time and blamed Wayne for his wife's death, something he thought wouldn't have happened had Wayne never suggested he become district attorney.

Making a play on Commissioner Gordon's life in the chaos, Two-Face was caught off guard when his coin, deciding whether Gordon would live or die, landed on its side instead. Dent then escaped and returned to his safehouse, spun his coin on its side, looked at a picture of his deceased wife, and shot himself in the head.[11]

My Own Worst Enemy

Two-Face resurfaced in Gotham over a year later, having survived his suicide attempt. The bullet missed his brain, only worsening his mental stability to the point that the "Two-Face personality" was overtaking the "Harvey Dent" one. 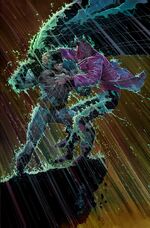 An adventure for a cure

With only so much strength left, the Harvey personality reached out to Batman, claiming that a cure for his condition was available if only the Bat could help him get to the Arkham boys home where they first met. Batman agreed but, when they started their journey together, the Two-Face personality took over and made a televised threat that, if they weren't stopped, all the dirt he had on everybody would be publicly released. The person that successfully stopped them though would also be secretly transferred millions of dollars stolen from the three biggest crimelords in Gotham. Now with a huge bounty on both of their heads, Batman and Two-Face began their 500-mile journey together.[12]

Finally making it to their destination, after defeating several assassins, Batman found that the cure was actually not a guaranteed cure at all, it was a chemical that would make Dent permanently Two-Face. The Harvey persona had given up hope and wanted to relinquish control over to his worse half, a surprise even the Two-Face persona didn't know. With the Harvey persona threatening to douse all of Gotham in this "cure" if Batman didn't use it on him, Batman instead injected Dent with a different chemical, one that made Harvey immune to his own "cure". Dent didn't deserve to permanently be Harvey or Two-Face, and so now they were forced to fight forever.

Following the collapse of the wedding between Batman and Catwoman, Batman began investigating a seemingly normal murder in Gotham who actually turned out to be Karl Twist - a mercenary that Harvey Dent had failed to put behind bars while still district attorney and was now an agent of the Kobra Cult. Batman tracked down Two-Face and learned that the evil Two-Face identity hadn't killed Twist - the good Harvey identity had done it in a fit of rage. In an effort to protect Harvey's image as the "moral" side of Two-Face, the Two-Face persona framed himself for the murder and actively worked with Batman and Commissioner Gordon to apprehend Kobra to correct Harvey's mistake. Two-Face seemingly died in an explosion in the final confrontation with Kobra.

Despite a funeral being held, Batman quickly tracked down Two-Face, who faked his death and was attempting to sell a trace of Kobra's toxin to Leviathan. [13]

Retrieved from "https://dc.fandom.com/wiki/Harvey_Dent_(Prime_Earth)?oldid=2806323"
Community content is available under CC-BY-SA unless otherwise noted.