Harvey Quinn was a member of the Gang of Harleys.

After the Brainiac 5 were defeated, he fought with the other members of the gang for control of New York City, and took Queens for himself. He remained in control of Queens until Harley Quinn returned and put Coach in charge.

At some point, Harvey and Harley Queens went swimming in the Gowanus Canal together, resulting in Harley Queens' head becoming fused to Harvey's stomach. He subsequently became known as Harvey Queens. 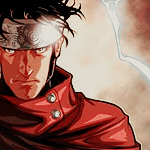