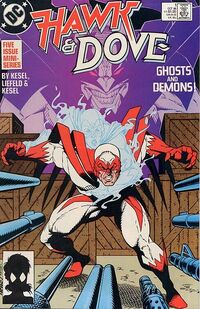 Hawk and Dove (Volume 2) brought the character of Hank Hall back into the mainstream spotlight as the character of Hawk, with newcomer Dawn Granger filling in the role of his new partner – the Dove. This title was published as a five issue limited series throughout the winter of 1988-1989. Sales of the series proved strong enough and later that same year, a Hawk and Dove ongoing series began publication.

Back to Comics Contents : Comics H : Hawk and Dove Vol 2

Retrieved from "https://dc.fandom.com/wiki/Hawk_and_Dove_Vol_2?oldid=2445672"
Community content is available under CC-BY-SA unless otherwise noted.