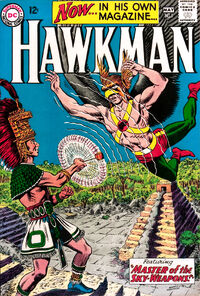 Hawkman (Volume 1) was an ongoing comic book series published by DC Comics from May of 1964 until September of 1968. The series focused on the Thanagarian Earth-One hero, Hawkman (Katar Hol) and his wife and partner, Hawkwoman (Shayera Hol). Many of the stories from this series are now considered apocryphal due to events which transpired in the Hawkworld ongoing series.

Retrieved from "https://dc.fandom.com/wiki/Hawkman_Vol_1?oldid=2514504"
Community content is available under CC-BY-SA unless otherwise noted.