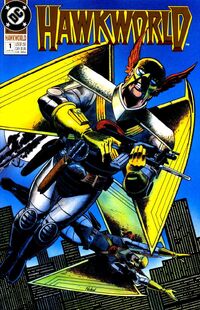 Hawkworld (Volume 2) was an ongoing series published from June of 1990 to March of 1993. The series continued storylines established in 1989's three-issue Hawkworld mini-series, which effectively re-invented the character of Hawkman as well as that of his adversaries and supporting cast. The series is also noted for establishing events that ran incongruous to previous continuity, creating sweeping complications in terms of Hawkman's retroactive canonical existence in the greater DC Universe.

Retrieved from "https://dc.fandom.com/wiki/Hawkworld_Vol_2?oldid=2133445"
Community content is available under CC-BY-SA unless otherwise noted.