I know vengeance is a sin. So I promise to say a few "Hail Marys" along the way.

Helena Bertinelli is Huntress, a masked vigilante who operates in Gotham City. She is currently a member of the Birds of Prey, and was formerly the Director of the international espionage agency Spyral.

Helena was born a so-called "mafia princess", a daughter of the Bertinelli Family, an infamous crime family in Gotham City. When Helena was a child, her mother Maria had fallen in love with a mobster of a rival gang, Santo Cassamento. Knowing that her husband Frank would never agree to a divorce and seeing no other way to live her life with Santo, the two hatched a plan to murder Frank and flee with the children. However, Cassamento betrayed Maria and used the opportunity to murder the Bertinelli children as well, with the aim of wiping out the Bertinelli lineage.[1] Helena survived by hiding under a table during the attack, while her father and brother were killed. She was taken in by her aunt and uncle in Sicily, and learnt archery and how to fight. Helena swore to uphold the Bertinellis' original mission of protecting others.[2]

Through unknown circumstances, Helena was presumed dead. During that time, her name was assumed by Helena Wayne as an early alias.[3] She had, in fact, remained alive, and joined Spyral, adopting the alias Matron.[4]

Helena was the Spyral agent who rescued Dr. Leslie Thompkins after she was attacked in an African camp while providing medical aid there. Helena then brought Leslie to Spyral's headquarters, where they interviewed her, and consequently learned the Batman's identity through her.[4][5] Later, she personally recruited Richard Grayson as he travelled the globe, attacking assassins, terrorists, and members of the Fist of Cain in order to catch Spyral's attention.[4] 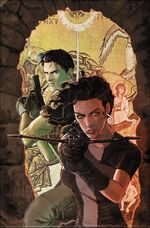 Several weeks after introducing Grayson to Spyral and training him at St. Hadrian's Finishing School for Girls in England, Helena accompanied him on a mission to retrieve and neutralize a Meta-Bomb secreted within the body of Ninel Dubov. After being thwarted in her own attempt to extract Dubov by an SVR agent, Matron assigned that mission to Dick. She later rendezvoused with him after he dragged Dubov to a nuclear power plant in the hopes of containing his power. She returned them both to Spyral HQ in England, where they were congratulated by Mister Minos.[5]

After retrieving the Paragon Organs together with Dick on several missions, Mr. Minos revealed his plan to take down Spyral to her. He shot Helena with her own crossbow, but due to her suspicious nature she had already placed a safety measure into her crossbow. She was able to warn the other Agents and killed Minos.[6]

In the aftermath, Helena became the Director of Spyral, but with the agents of other espionage groups being killed and Spyral being held responsible, she had to be on the lookout for a new traitor to stop a war from unfolding.[7] 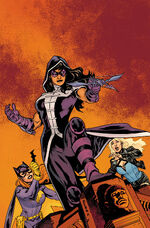 The Birds of Prey

Seeking reinvention after leaving Spyral, Helena returned to Gotham City and became the Huntress, devoting herself to a new cause: hunting down the mafia men who murdered her family. However, as she attempted to track down the first mobster on her list, she was confronted by Batgirl and Black Canary. Barbara and Dinah were also pursuing the same man, believing him to be connected to the individual that was stealing Batgirl's Oracle identity.[8] The three women soon realized their goals were similar and combined their efforts, becoming the new Birds of Prey.[9]

Despite Huntress frequently clashing with Batgirl over her willingness to kill, the Birds succeeded in tracking down Oracle, leading Helena to an unsuspected target in the process: her mother, Maria Bertinelli, whom Helena thought was dead. Maria had become a mob boss operating under the name Fenice.[10] Maria told Helena about her part in the Bertinelli murders, and that she had spent years building herself up in order to enact her revenge on the Cassamentos for killing her children. Maria allowed her daughter the opportunity to kill Santo Cassamento herself, but Huntress showed mercy and allowed him to live, before abandoning her mother for her selfish actions.[1]

Helena became a trusted member of the team and struck up a close friendship with both Barbara and Dinah, and began teaching at a school in Gotham.[11]

Retrieved from "https://dc.fandom.com/wiki/Helena_Bertinelli_(Prime_Earth)?oldid=2735621"
Community content is available under CC-BY-SA unless otherwise noted.