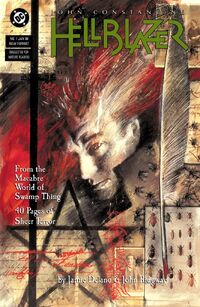 Hellblazer was an ongoing occult-noir comic book series featuring the hard-luck hero, John Constantine. The series began publication in July of 1988 and ended with issue #300. Beginning with issue #63, Hellblazer became a part of the Vertigo family of titles along with several other titles including Sandman and Swamp Thing. The title character, John Constantine, was created by writer Alan Moore and artist Rick Veitch, and first appeared in the pages of Saga of the Swamp Thing #37. The Hellblazer comic was loosely adapted into the 2005 Warner Bros. film, Constantine.

Retrieved from "https://dc.fandom.com/wiki/Hellblazer_Vol_1?oldid=2514545"
Community content is available under CC-BY-SA unless otherwise noted.