Might makes right is the only thing these evil bastards understand.

Hank Hall was the first Hawk. In contrast to his brother Dove who represents order and peace, he represents chaos and war. During Armageddon 2001, he became the supervillain Monarch and during Zero Hour he became known as Extant, one of the most powerful beings in the universe wielding the combined energies of both Hawk and Dove.

Hawk and Dove are empowered by the mystical Lords of Chaos and Order.

Brothers Hank and Don Hall gained their powers of heightened strength and agility from two Lords of Chaos and Order fallen in love.[1][2] and fought crime together as Hawk and Dove, despite their diametrically opposed opinions about the use of force. The conservative Hawk (Hank) was hot-headed and reactionary, whereas the liberal Dove (Don) was more thoughtful and reasoned (but prone to indecisiveness). Their father, a judge, displayed more balanced political beliefs and firmly disapproved of vigilantism, not knowing his sons were costumed adventurers.

Hawk and Dove would eventually become members of the world-famous group of teenaged superheroes, the Teen Titans. They first met the original team at the time consisting of Robin, Kid Flash, Speedy and Wonder Girl when both groups were tracking down the same gang.[3] After philanthropist Loren Jupiter began financing the team, Hawk and Dove joined as regular full-time members.[4] However, their responsibilities back in Elmond forced them to quit later.[5]

The Halls did eventually join Titans West though, along with Lilith, Beast Boy, Batgirl, Golden Eagle, and even Gnarrk. Together, they were part of a team that took down master criminals Captain Calamity and Mister Esper, discovering a link between attacks on them and those on the East Coast.[6]

During the 1980's, the pair struggled with a disillusioning world that had evolved past their individual ideals, and expectations. The mysterious voice that had granted them their powers came back to strip them of them until they could become worthy of them once again.[7] Still, they managed to attend the wedding of Donna Troy and Terry Long.[8]

During the first big Crisis, Hank and Don came out of retirement and were back in action once again. They were seen as a part of the large group of heroes who went back in time to bravely fight the Anti-Monitor at the Big Bang.[9] Unfortunately, while saving a small child from a burning building, Dove was murdered and obliterated by the Shadow Demons that were invading the world.[10] This only served to make Hawk angrier, without an anchor to control him.

With his brother dead, Hawk was on a bad path to becoming a dangerous man. He joined an incarnation of the New Titans, but required frequent calming to make sure he did not kill any of the villains they fought.[11] A woman named Dawn Granger became the new Dove after mysteriously gaining her powers in London. Although at first Hank did not take kindly to another person taking his brother's position, he eventually warmed up to her and they became an excellent team together.[12] 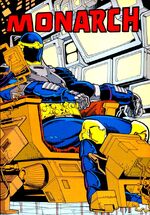 Monarch was an oppressive tyrant from a bleak, dystopian Earth fifty years in the future. The people were unhappy with his rule, particularly a scientist named Matthew Ryder, an expert on temporal studies, who was convinced he could use his technology to travel back in time and prevent the maniacal ruler from ever coming to power. He learned that forty years ago, one of Earth's heroes would eventually turn evil and become Monarch, and ten years from that would conquer the world. During a time travel experiment, Matthew was transformed into Waverider, and began searching the timestream for the hero who would become Monarch, little knowing that Monarch was following him.[13] When Monarch came into battle with the heroes of the present day, he killed Dove, and her enraged partner killed him for it. Removing the villains mask, Hank discovered that HE was Monarch, and donned the armor.[14]

When hostile aliens encounter Monarch and Atom in the past (sometime between 230 and 65 million years ago), they attempt to enlist both (without either's knowledge) to assist them in creating a wormhole. The wormhole's creation would destroy the universe in which the primitive Earth existed, but would allow the aliens to travel freely. 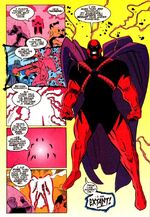 Shortly after returning to the present, Monarch confronted Waverider and absorbed most of his time-warping abilities, giving him the power to travel through time as he pleased. Calling himself Extant, he joined forces with renegade Green Lantern (Hal Jordan), now known as Parallax, in a plan to alter time as they saw fit (as seen in Zero Hour).

His first act was to alter the future so that he could have a meta-human army at his disposal, mostly consisting of members of the Teen Titans; his plan was to amass an army so powerful that no one could interfere with his efforts to control time itself. Several heroes banded together to stop his plans before they began in the 30th century, and altered history so that his followers never came to exist in the future.

Down, but not out, Extant began to strike back at the heroes at Ground Zero, the beginning of time. Parallax had warped several meta-humans from various time periods together for the ultimate assault, and Extant hit the Atom with a chronal blast, de-aging him into a teenager. Sensing defeat was imminent, he escaped the fight, promising vengeance at a later date.

Extant would first reappear in the 1999 one-shot, "Impulse: Bart Saves the Universe."[15] In it, Extant picks a fight with the original Justice Society as a means of tricking the Linear Men into saving the life of an innocent bystander who was destined to die. The man they saved would now go on to develop a nuclear weapon that, when tested, would shift the Earth out of its proper orbit, causing massive changes in the timelines of some of Earth's greatest heroes. Among these changes, Hal Jordan never becomes Green Lantern, thus he never becomes Parallax, and never stops Extant from destroying all of time. Fortunately for the citizens of time, Impulse arrives and is able to defeat Extant and prevent the Linear Men from saving the doomed scientist.

He would engage the Justice Society again on a later date where, following another setback, he again attempted to escape. Instead, Extant was teleported (by Hourman (Rex Tyler) and Metron of the New Gods at Atom-Smasher's behest) into the seat of an airplane whose crash Kobra had caused earlier (in his relative timestream). As a result of this, Atom-Smasher's mother was saved; she was on the plane when it crashed, but Atom Smasher replaced his mother with a weakened Extant, saving her life but murdering the supervillain. Extant is believed to have died as a result, and, indeed, his appearance as a zombie in Teen Titans #31 (2006) (alongside his brother, Don) would seem to confirm his death. However, as a time traveler, this does not preclude further appearances of Hank Hall, because many versions of him still exist throughout the timestream. 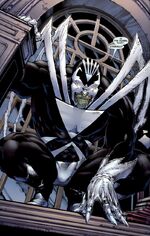 Hank Hall is resurrected as a zombie to join the new Black Lantern Corps and receives a Black Lantern Ring during the events of Blackest Night. His brother Don is unable to be brought back from the dead by the rings, because unlike Hank, his soul is completely at peace.[16] Immediately, back in his uniform as Hawk but with a distinctly more macabre inflection, Hank attacks the new Hawk and Dove, Dawn and Holly Granger. Although he was unable to get his hands on Dove due to her powers, he tore his successor's heart out to consume her rage.[17] In the aftermath of the final battle, Hank is brought back to life by the power of the white light.

Dawn starts to worry about Hank's behavior when he was resurrected, as he has become even more violent than he had been prior to his death. Later she bumps into Deadman when he accidentally teleports into her room while she is sleeping. After introducing himself, Hawk comes crashing in and holds him toward a wall. Deadman tells his story of what happened so far and Hawk comes up with an idea to try to resurrect Don. However, that attempt failed as Don told Deadman he is at peace. Dawn then suggests that he try reviving Holly instead.

Around this same time period, Dawn and Hank are recruited into the Birds of Prey by Zinda Blake while in Gotham to stop some teenaged super villains. Immediately after their meeting with Zinda, the two are called in by Oracle to rescue Black Canary and Huntress from a villainess calling herself White Canary.

Shortly after this, Hawk and Dove were summoned by Oracle to fight along the heroes of Gotham against the Seven Men of Death and prevent them from reaching their target, Vicki Vale.[18]

As Hawk and Monarch:

Retrieved from "https://dc.fandom.com/wiki/Henry_Hall_(New_Earth)?oldid=2826495"
Community content is available under CC-BY-SA unless otherwise noted.