--because it won't be Hank Heywood fighting his own private war against the Fifth Columnists and Saboteurs: It'll be a man forged in fire and cast in agony, a warrior with a name to match his origins-- STEEL, the Indestructible Man!

Commander Steel, the Indestructible Man, was Henry "Hank" Heywood, Sr.. He gained his name became his bones were replaced with steel fighting in World War II. He became a member of the All-Star Squadron and started a legacy, which was continued by his grandchildren Steel and Citizen Steel

Henry Heywood enlisted in the U.S. Marine Corps prior to their involvement in WW II, but was injured when saboteurs attacked his base spearheaded by the man who would become Baron Blitzkrieg in November, 1939. As a biology student under the tutelage of Doctor Gilbert Giles, his former professor performed extensive surgery on him with mechanized steel devices that facilitate normal human functions only on a superhuman level. He adopted the persona Steel, and started fighting fifth columnist saboteurs before being sent to Europe on secret missions.

In February 1940, Steel was in London, England. While there he prevented an assassination attempt on the life of then-Major Winston Churchill by a costumed Nazi agent at the Ministry of War. Two nights later, Churchill sent him on a mission to kidnap Adolf Hitler at a concentration camp near Tozew, Poland. The Camp Commander's name was unknown, but Hitler referred to him as "Ein Schlachter", the Butcher. Captured, he was brought to the death camp. While attempting to escape, he was brought down by being hit by a jeep and later sustained a head wound from a bullet. Over the next two years, he was systematically brainwashed by Baron Blitzkrieg, the camp commander, to assassinate Churchill and Roosevelt.[1]

Steel saved British Prime Minister Winston Churchill from an assassination attempt in Ottawa, Ontario, Canada on the night of December 20, 1941.

After becoming Steel, Heywood soon allied himself with the All-Star Squadron and while in a field of war was later commissioned "Commander Steel" by US President Roosevelt himself. He joined the Squadron for a brief period. 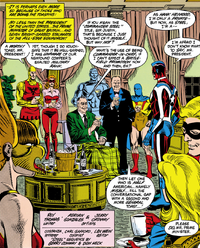 Years later, as a wealthy industrialist, he incorporated the same mechanized components into his grandson Hank Heywood, III—who later joined Justice League of America and fought Heywood along with his enemy Mekanique, former allies Justice Society of America and their descendants Infinity, Inc.

After his grandson's death, Heywood resumed the mantle of Commander Steel and died battling the super villain Eclipso, while a member of the Shadow Fighters. He did come to a heroic end—detonating the Sunburst 300 (a device meant to destroy Eclipso) as his teammate Nemesis escaped.

Retrieved from "https://dc.fandom.com/wiki/Henry_Heywood,_Sr._(New_Earth)?oldid=2784576"
Community content is available under CC-BY-SA unless otherwise noted.