Sons are born to die in war.

The Heretic, also known as the Fatherless, was a clone of Damian Wayne, made by his mother Talia al Ghul after he defected to Batman's side.

Talia al Ghul had a romance-story plan for herself and Batman: she would bear him a child, and they would unite as a family to rule the world. Unfortunately, Batman turned her down, and her plan to send her son to usurp the name of Batman backfired. So she turned to science to provide her with the perfect child: a clone of Damian Wayne.

While Batman was missing for a year, his former sidekick, Dick Grayson was acting as Batman at the time. After an attempt to control her son's body to kill Grayson failed, Talia was forced to disown Damian, who had chosen to follow his father's path as a crime fighter. As she bids farewell to her son, Talia makes sure to show him that she's already cloned him, in an effort to create a new son who she can mold to her desires.

After that, she decided to speed up her new son's development. Taking him to a facility in Yemen that created metahuman bodyguards using experimental surgery, she had him gestated in the body of a whale. Growing to the size of an adult human, he fought his way free of the whale, and subsequently decimated the facility's entire population of metahumans as he honed his killing skills. By the time the Batman returned, he was ready.

On Batman Inc's inaugural mission, Batman and Robin found the facility and Robin confronted the clone, now calling itself the Heretic. Cryptically remarking that they would meet again, the Heretic departed.[1] He had since been seen guarding Talia al Ghul whenever she appeared in public as The Leviathan, the leader of the eponymous terror-army. He later took on many of Batman Incorporated members singlehandedly, killing Knight in the process, while defeating Batman himself.

Heretic's right eye was however blown out due to Squire's pellet.[2] Talia gives him the world-bomb trigger to guard. He arrived on the scene at the exact wrong moment as Robin and Nightwing tried to reach the higher levels of Wayne Tower. He took out Nightwing with one move, then engaged Robin. Robin put up a lethal assault, but thanks to Leviathan foot soldiers shooting at him, the Heretic gained an advantage and eventually stabbed Robin through the heart with a sword taken from a display case.

Batman arrived on the scene and was horrified to discover his son is dead. Enraged, he attacked the Heretic with the help of Nightwing, but the man-monster easily crashed them both. Recovering Damian's body, they fled. Meanwhile, the Heretic returned to Talia's side, where she berated him for killing Damian without waiting for her command. He replied that he did not need her command, having developed the ability to observe, assimilate knowledge and arrive at conclusions independently. He declared that he was Batman now, and decided that Gotham was his by right.

Batman defeated him at the end and was in shock to see him as a boy in an adult body. He was killed in a confrontation with Talia atop of Wayne Tower by having his head decapitated by a sword and by a bomb being placed on his back spine that blew up Wayne Tower. 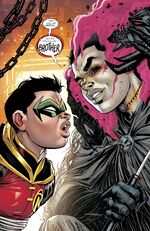 "The Other" reveals his true identity to Damian.

A rogue member of Talia's organization intent on preserving Ra's al Ghul, revived him using the Lazarus Pit. He spent his time in a monastery studying various ancient texts. There, he discovered about "The Other" who had caused misery to others for a millenia while staying hidden.

The Hertic easily slayed The Other and realized he was only a man with nothing more than a criminal empire which he gained control and adopted the moniker for himself. He used The Other's criminal empire to manipulate other criminals and took them out when they remained of no further value to him.

After killing Lady Vic, he blew up the building Teen Titans found her corpse in to test their abilities. As he had started dying, he had Lobo kidnap the Teen Titans, so Damian could take over his mission and blackmailed him with the lives of his teammates.

Heretic also offered to help Damian free Djinn from her ring with the Book of the Damned, if he agreed to take over his mantle. Djinn however convinced Damian to not give in to the temptation and he assaulted The Other, but found out he was just a clone of the original who attacked him from behind. During the battle with the Teen Titans who had broken out with the help of Roundhouse, The Other fell through a hole in his castle's floor with his fate undetermined.[3]

Retrieved from "https://dc.fandom.com/wiki/Heretic_(New_Earth)?oldid=2713014"
Community content is available under CC-BY-SA unless otherwise noted.