History of the DC Universe (Volume 1) 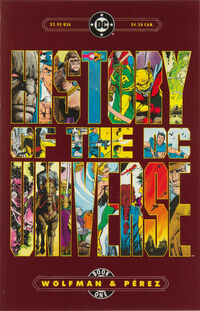 History of the DC Universe was an informational follow-up to Crisis On Infinite Earths, told as a record made by Harbinger of the history of the newly-reformatted DC Universe (the Post-Crisis New Earth reality) from the time of its beginning to some point in the future, establishing what was canonical at the time of its publishing. Though some parts of it were immediately problematic (like the appearance of the Earth-Four version of Captain Atom prior to the character's redesign and reintroduction), much of it remained valid until a few years later when revisions of other characters began to occur, as when Hawkworld created problems with continuity by having the modern-day Hawkman and Hawkwoman be recent introductions some years past the Crisis on Infinite Earths rather than their original entry point as early members of the Justice League.

Back to Comics Contents : Comics H : History of the DC Universe Vol 1

Retrieved from "https://dc.fandom.com/wiki/History_of_the_DC_Universe_Vol_1?oldid=2098049"
Community content is available under CC-BY-SA unless otherwise noted.