I live a very ordinary life. It's the life I want to live. And I'll be damned if I let it go without a fight.

Honor Guest served as a deadly assassin known as the Silencer for Leviathan until Talia al Ghul allowed her to retire. She then proceeded to create a happy, normal life, marrying a man named Blake and having a son named Ben. After a civil war sparked within Leviathan, Honor was forced to return to her role as the Silencer to protect her family. 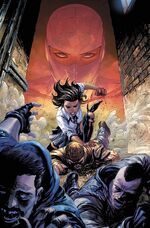 Honor as a student at St. Hadrian's

Little is known of the early life of the girl who would later become Honor Guest, other than the fact that she wound up in a clinic owned by the scientist Jonah Nine at a young age. Through unknown circumstances she gained the unique ability to project zones of silence from her body. The leader of the League of Assassins, Ra's al Ghul, learned of her power and hoped to recruit her to his organization. He sent her to St. Hadrian's Finishing School for Girls to be trained as an assassin. Ra's' daughter, Talia al Ghul, visited Honor at St. Hadrian's and saw her as the perfect candidate to help her forge a covert organization of her own, one that would replace the need of the superhero; she would call this organisation Leviathan.[1][2] Talia continued to train Honor for several years to become an agent of Leviathan who would do whatever she thought necessary to assist in the organization's cause.[3] Talia gifted Honor with the nanode, a microscopic device that would reweave clothes into a battle suit and provide Honor with various devices for her mission.[4]

Over the years Honor became more and more skillful and effective in her role as an assassin until she was given the codename of The Silencer by her mistress.[4] The Silencer displayed unyielding loyalty to Talia's cause, not once requesting for any form of release from her duty. Ra's would often send assassins from his League to combat Leviathan, hoping to sabotage the organization before it was fully created. However the Silencer was always able to cut these assassins down, thus keeping Leviathan floating. In time Honor came to see Talia and Leviathan as her family, as it was all she had ever known.[1] 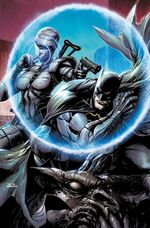 The Silencer's run in with the Batman

On one occasion Honor was sent on a mission to Gotham City by Talia, however she was not informed what the premise of her mission was. When she arrived in the city she met a real-estate worker named Blake Guest, whom she hired an apartment from. She waited in the apartment for days until she was given directives from Talia, who informed her that she was there to protect the Batman from assassins sent by Ra's al Ghul. While on route to the Batman's possible locations Honor noticed a mugging undergoing. Deciding to help the victims she descended on the muggers and murdered all of them, this brought the attention of Batman who attacked the assassin for murdering the thugs.[1]

After a brief skirmish between the two fighters Ra's al Ghul's assassin the Reaper arrived. The two fought together against the powerful cybernetic warrior, however his skill and body mods proved too much for the pair of them. As the Reaper beat Batman to a pulp Silencer saw her opportunity, she grabbed the Reaper's sword from his back and used it to decapitate him, she then took advantage of Batman's crippled state to escape the scene with no further incidents. After the completion of the mission Honor began dating Blake Guest as she started to believe that she wanted an ordinary life for herself.[1]

End of the Silencer 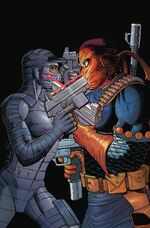 After a sparring match against Talia Silencer worked up the courage to ask if she could be released from her eternal work. Talia agreed to let her live a normal life as long as she fulfilled one last job for her old friend. Talia ordered her to kill a former Leviathan member, Guile, who was planning to trade Leviathan's secrets to the authorities in exchange for freedom. The Silencer shadowed Guile for days and learnt that he had a family and just wanted to live an ordinary life. [5]

A few days after this Silencer made a move on Guile hoping to eliminate him and earn her freedom, however she was intercepted by Deathstroke who was widely considered to be the most effective mercenary alive. The two battled until Honor was able to temporarily disable him by kicking him out a window, she then intercepted Guile and shot him in the head before Deathstroke could recover. The mercenary informed Silencer that killing Guile would cause a civil war in Leviathan as all trust in the organisation had been broken. Honor was then able to escape from Deathstroke with her life.[5] Honor was granted her wish and left her life as an assassin behind her, settling down in Charleston, marrying Blake Guest and having a son, Ben.[4] 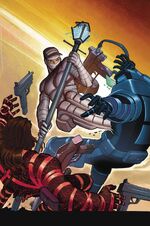 During her daily routine, Honor was assaulted by an old Leviathan peer known as Killbox, who told her that she was on the wrong side of the supposed Leviathan civil war. After killing Killbox, Honor went home where she was greeted by Talia al Ghul. Talia told her of the dangers the supposed war might bring upon her and her family and gave her the nanode she used as the Silencer. Blake offered to have Talia for dinner but Honor wanted nothing to do with the Leviathan Civil War, and so decided to take Talia to the airport. While driving Talia out of her neighbourhood the pair were attacked by Bloodvessel and Breacher who worked for a man named Quietus - a leader of a rebel Leviathan faction. As the pair were about to kill Talia, Honor put on her suit and defended her former boss - becoming the Silencer once more.[4]

After a brief fight Honor was able to gain the upper hand on Bloodvessel and Breacher eventually killing the pair. When she turned around Talia had disappeared into the night. She then called for Leviathan Cleaners to put a lid on the whole incident, which managed to fool her husband and the rest of the neighbourhood. Since she had retired from Leviathan, she had to accept a meeting with Mr. Remedy, the right hand man of Quietus. The following day, she went to a meeting with him at a "Maulmart", a weapon depot for Leviathan, where she was ambushed by dozens of assassins, in violation of Maulmart's supposedly neutral status.[6]

She managed to escape by making use of stun grenades and her powers, but was badly wounded in the process. Honor exited the Maulmart just as an orbital strike destroyed it, ordered by Quietus, who sacrificed scores of cybernetic assassins and Remedy in the process. The Silencer also threatened Talia al Ghul, saying she would kill her if the Demon's Daughter failed to put an end to the civil war, which was putting Honor's family in danger.[7]

Captured by Deathstroke, Honor fought with the mercenary but was then convinced to sell Talia al Ghul to end the Leviathan civil war after she realized that her former mentor had blown her cover and forced her into a war.[5] The next Sunday, she brought her son to a diner, where she was approached by Talia. The two of them were then ambushed by killers from both Quietus and Gunn, two underbosses warring for the control of Leviathan. Honor and Talia made short work of the ambushers but when the former head of Leviathan threatened Ben, the Silencer killed her friend and left the diner, deeply shaken by what she had done.[8] 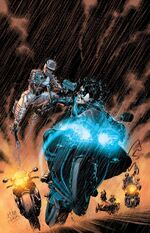 A short time later, Honor learnt that a Leviathan assassin called Endgame was targeting the hero Nightwing, as he wanted Nightwing as a trophy for his faction of Leviathan. Silencer decided to assist Nightwing in repelling the would be assassin. She tracked him to the Isle of Harm where he planned to take place in a cosmos spanning annual race, where the winner would be allowed to receive the answer to any question. While awaiting the beginning of the race Nightwing was attacked by Endgame, but was driven off by Silencer after she opened fire on him from a distance. Before the race Silencer noticed Endgame plant a bomb on Nightwing's bike. When the race began Silencer destroyed Nightwing's bike in order to protect him from the assassination attempt.[9]

Silencer then picked up Nightwing and explained to him why she was there, he told her that he was there to protect his friends Willem Cloke and Vicki Vale from the villainous Wyrm, who wanted Nightwing to ask a question for him that would greatly effect the cosmos. Honor was then able to help Nightwing fend off Endgame once again, knocking him out of the race in the process. When the pair reached the finish line in first place Honor bid Nightwing a farewell and wished him luck with helping his friends.[9] 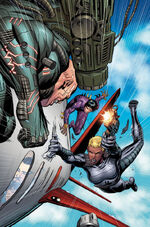 After the skirmish in the diner Honor seeked to end her problems once and for all, she discerned that the only way to do this was to find the body of Talia and destroy it, thus ending the woman's grasp on her family. Honor knew that Talia's body would be taken to the Lazarus Pit in Khadym for revival and so hoped to intercept and destroy it from there. Honor planned a trip for her and her family to go to Action Land, a Superman themed theme park, as it was located in Sansaro which was near the border of Khadym. During the flight to Sansaro Ben pointed out that a little boy from the diner was present on the plane, Honor immediately recognized the boy and his partner as the freelance assassins Cradle and Grave.[3]

Realizing she had to take them down covertly she drew the pair down to the cargo hold where they revealed that they were tailing her so they could inform the underbosses of Talia's location, thus earning a hefty sum of money. After hearing there reasoning the Silencer engaged the pair in combat. Cradle shot a cannon into the side of the plane hoping to kill the assassin, however the Silencer used the opportunity to send the pair flying out of the plane to their deaths. Honor and her family then reached the resort without anyone realizing what had caused the damage to the plane.[3]

After reaching the resort Honor met up with Iverson, a Leviathan data broker who she believed could help her stay out of trouble in the rogue nation of Khadym. Iverson informed Honor that the best way into the lawless nation was through a smuggling truck that occasionally made shipments into the nation. Iverson also told her that the two major players in the war were Quietus and Gunn. When she went to intercept the truck she discovered Quietus was also attempting to cross the border in order to eliminate Talia. Believing she was still an agent of Talia, Quietus attacked Honor and a fight broke out between the two of them. The pair soon came to realize that they had been set up by Talia's magical lieutenant Lady Wishbone, who wanted to eliminate two of the biggest threats to Talia's Leviathan. At that moment Honor and Quietus became afflicted by a magical spell, this spell caused the pair to swop bodies with each other, meaning Honor was now stuck in Quietus' body. When Honor went to confront Quietus about what they should do she noticed he had left.[10]

Retrieved from "https://dc.fandom.com/wiki/Honor_Guest_(Prime_Earth)?oldid=2713185"
Community content is available under CC-BY-SA unless otherwise noted.