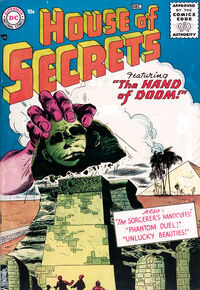 House of Secrets (Volume 1) was an ongoing series, published by DC Comics. It originally ran from 1956 till 1966 and it was reintroduced in 1971 and ran until 1978. It was a companion series to House of Mystery (Volume 1). From 1956-1966, the series was an anthology with a focus on "weird" science-fiction and fantasy. Mark Merlin, Eclipso and Prince Ra-Man were introduced in House of Secrets and were recurring features in the mid-to-late 1960s.

In 1971, House of Secrets was revamped as a horror series and given a host, Abel, the brother of the House of Mystery's host, Cain. From 1971 to its cancellation in 1978, House of Secrets remained a horror anthology without any recurring characters, although Swamp Thing was first introduced in House of Secrets #92, and the Patchwork Man starred in #140.

Retrieved from "https://dc.fandom.com/wiki/House_of_Secrets_Vol_1?oldid=2828380"
Community content is available under CC-BY-SA unless otherwise noted.