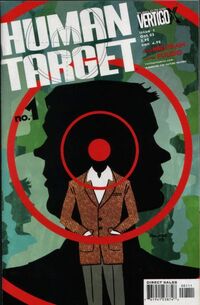 Human Target was an ongoing series published by Vertigo Comics, featuring Christopher Chance. It was produced several years after the miniseries based on the character came out, and was also written by Peter Milligan.

Retrieved from "https://dc.fandom.com/wiki/Human_Target_Vol_2?oldid=1367174"
Community content is available under CC-BY-SA unless otherwise noted.