Hunter: The Age of Magic (Volume 1) 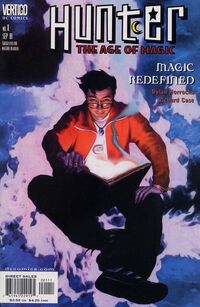 Hunter: The Age of Magic is a ongoing series produced by Vertigo from 2001 to 2003. It was written by Dylan Horrocks and pencilled by Richard Case. Continuing from Horrocks's The Names of Magic limited series, this series depicts Tim Hunter's final days at the White School and the beginning of his life following graduation. Following cancellation in 2003, Tim's story continues in Books of Magick: Life During Wartime.

Back to Comics Contents : Comics H : Hunter: The Age of Magic Vol 1

Retrieved from "https://dc.fandom.com/wiki/Hunter:_The_Age_of_Magic_Vol_1?oldid=2548623"
Community content is available under CC-BY-SA unless otherwise noted.