You're a hero, Barry. You couldn't kill me before. You won't kill me now.

Zoom was a maniacal super-speedster from Earth-2, intent on stealing the speed of all speedsters in the multiverse. He masqueraded as Jay Garrick, the Flash of Earth-3, to gain Barry Allen's trust.

When he was 11, Hunter saw his father kill his mother. Hunter's father ended up in jail and Hunter was raised in foster care since no relative wanted him. Hunter later became a convicted serial killer, and was going through electroshock therapy when Earth-2 Harrison Wells' particle accelerator exploded underground. This connected him to the Speed Force, and he escaped. Zolomon killed some police officers and left one to tell the story. The one police officer said he saw a man "zooming", giving Zolomon the alias of Zoom. Zoom later killed the police officer in his house. 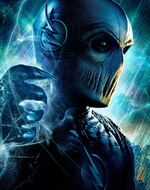 Hateful of the world around him, Zoom later had an army of metahumans serving under him. Interested in further increasing his speed, Hunter Zolomon started to use the Velocity serums that he engineered with his knowledge of chemistry. The serums worked and with his new speed traveled to alternate worlds. Encountering Jay Garrick, he kept him prisoner and impersonated him. He acted as the Flash to give people hope and to be Zoom to take that hope away. He later discovered that the Velocity serums were killing him. He tried to take Jay's speed, but it didn't work. The Speed Force discovered what he did and took his power away from him. Without additional speed force in his body, he would die. An opportunity for restoration presented itself in form of breaches to Earth-1 opening after the confrontation between Barry Allen and Eobard Thawne. Zoom realized what he needed to do to save his life and started the invasion of the other Earth with his obedient meta-humans. While Zoom's "breachers" fought the Flash, forcing him to improve his abilities, especially his speed, Hunter Zolomon masqueraded as Jay Garrick to gain the trust of Barry Allen, becoming his mentor, as well Caitlin Snow, the creator of Velocity 9, with whom Hunter had fallen in love. His eventual goal was to destroy the entire Multiverse, save for Earth-1, because it was the center of the Multiverse. However, he was defeated by Barry, who created a Time Remnant which stopped Zoom's machine, killing himself in the process. Barry was about to kill him, but chose not to as two Time Wraiths appeared out of the Speed Force. The Time Wraiths then transformed Zoom into a hideous corpse-like creature, and dragged him into the Speed Force. He was later seen hunting down Eobard Thawne as the demonic Black Flash, his sense of self and intelligence stripped away, reduced to nothing but a slave to the will of the Speed Force.

Retrieved from "https://dc.fandom.com/wiki/Hunter_Zolomon_(Arrowverse:_Earth-2)?oldid=2735720"
Community content is available under CC-BY-SA unless otherwise noted.