This is what Flashes do, right? Sacrifice themselves to save the day?

Hunter Zolomon was better known as Zoom, a speedster super-villain and enemy to the Flashes. Surviving alterations to the timeline, he dubbed himself The True Flash.

Hunter had a troubled relationship with his parents, as they rarely spoke to each other or to him. On the day Hunter was to leave for college, he came home to find the police laying siege to his house. His father was a serial killer, and when his mother told the police, Hunter's father had killed her. After refusing to give up, his father was killed by the police.

Hunter became obsessed with understanding the criminal mind, studying psychology and criminology in college. Hunter then later joined the F.B.I. along with his girlfriend (Ashley), whom he later married. One case resulted in Ashley's father being killed, as Hunter had believed the criminal they were after would not use a gun.[1] Hunter's belief turned out true much later as the criminal was set up by Eobard Thawne, the Reverse Flash. Ashley left him shortly thereafter, and the F.B.I. terminated his employment. Hunter was also left with a damaged knee due to the case, and required a cane for walking.

After arriving in Keystone City, he got a job as a profiler. He worked with the police in their Department of Metahuman Hostilities. His work put him in constant contact with the current Flash (Wally West), and the two became good friends. His insight was critical in solving a number of cases, but he always resented being stuck behind a desk.

Hunter was severely injured in an attack by Gorilla Grodd in Iron Heights[2]. The injuries left Hunter paralyzed from the waist down. He asked Wally West to use the time-traveling Cosmic Treadmill in the Flash Museum to prevent this from occurring. West refused, saying that he could not risk damaging the timestream. Zolomon then broke into the museum and attempted to use the treadmill himself. The resulting explosion destroyed the museum and shifted Hunter's connection to time. He could now alter his personal timeframe, giving the effect of super-speed. The idea made him able to slow down time around him. Later he would gain those powers in full.[3]

Zolomon decided that West had refused to help because, unlike the previous Flash Barry Allen, West had never suffered personal tragedy. Zolomon decided that if he became the new Zoom and killed West's wife (Linda Park), this would help the Flash become a better hero. Flash succeeded in defeating Zoom, preventing Linda's death, but his attack caused a miscarriage of their twin children. Zolomon was forced into a temporal anomaly and ended up in a comatose state, continually watching the death of his father-in-law.

Zolomon's ex-wife, Ashley Zolomon, replaced him as profiler and spent a lot of time attempting to communicate with him. Due to a car accident, Ashley was hospitalized for some time.[4] It was around this period that Zoom awoke from his coma, out of concern for Ashley. He cautiously chose to remain in his cell, however.

Zoom was driven out of his self-imposed imprisonment by Cheetah in an attempt to both harness super-speed and induct him into the growing Secret Society of Super Villains. The two shared a minor romance, but nothing serious happened as Zoom considered himself to still be married to Ashley.[5] 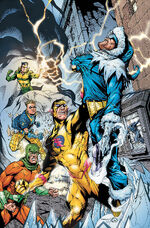 Zoom later infiltrated the already-growing "Rogue War" between Captain Cold's Rogues, the Trickster's reformed Rogues, and the Top's brainwashed rogues. Quickly spiriting his estranged wife Ashley out of danger to the home of Linda Park, Zoom returned to the battlefront to dispatch Captain Cold, claiming that the "Man Who Mastered Absolute Zero" was wasting the Flash's time with his longstanding, self-aggrandizing methods of villainy.

Zoom was not done. As the Flash and Kid Flash (Bart Allen) attempted to contain the battle, Zoom throttled Kid Flash and threatened to snap his neck in a manner reminiscent of what Barry Allen had done to Eobard Thawne (Professor Zoom). Before Zoom could kill Kid Flash, however, Professor Zoom himself arrived on a cosmic treadmill, with Jay Garrick chained to the front end.

A battle ensued between the two Flashes and Kid Flash against the two Zooms, but in the end, the two Zooms accomplished what they intended. They grabbed the Flash and jumped onto the treadmill. Zoom then forced the Flash to watch their first fight, in which Linda was severely injured and miscarried. Zoom felt that Wally West should be made to focus on the feelings of sorrow and loss from this experience and told Professor Zoom to rewind it so that he could watch it again. But as the scene started to rewind, West's uncle and mentor Barry Allen appeared, riding his own Cosmic Treadmill and saying that he had been looking for Professor Zoom.

Barry Allen removed West from immediate danger, telling West that he was here to return Thawne to his proper place in time, and that no matter how bad it seemed, West could win this if he "just pushed himself a bit". He and Thawne then disappeared through time. Zoom, enraged, began to run around the world, building up speed, with which to kill Linda. Wally rushed to catch up, but he was a step or two behind. At the last minute, he realized what Barry's advice meant and put on a final burst of speed, pushing himself, and hitting Zoom in the back. Zoom fell forward and was caught in the sonic boom which he himself used to kill Linda's babies (this ended up creating a "fissure in time" that restored Linda's pregnancy, just in time for her to give birth). Zoom ran for the treadmill, but West forced them back to their mutual present. Along the way, they viewed scenes of Zoom's life. Zoom realized his mistreatment of Wally and briefly apologized before slipping into the timestream. He was later seen as a ghost-like figure apologizing to his wife.

Zoom returned during the Infinite Crisis event as the Secret Society of Super Villains's chief speedster, but with his recent epiphany, a phase of his life as a character has ended.

Zoom later appeared at the sacking of Rome, being approached by Bart Allen's grandmother, to help her protect Bart from a great tragedy that the villain Inertia was setting up.[6] It is unknown whether Zoom traveled to this time period himself, or if he became stranded there after his last encounter with Wally West.

He was also pursued by the Justice League in an attempt to locate Sinestro after Batman (Bruce Wayne) and Green Lantern (Hal Jordan) learned of the existence of the Sinestro Corps.[7]

Zoom was pursued by the Justice Society of America into Atlanta. Damage was banned from the city, but entered anyway seeking revenge. During a scuffle, he ended up taking Zoom hostage until being talked down by Liberty Belle. Disappointed that Damage was not "improving", he threw a sharp pipe to kill him. Liberty Belle used her superspeed to catch it and toss it back, knocking Zoom unconscious.[8] 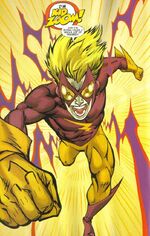 In Final Crisis: Rogues' Revenge he freed Inertia from his paralysis, inflicted previously by Wally West, hoping to make him his apprentice as a new Kid Flash, teaching how to "improve" his own life and the ones of others by inflicting great tragedies. Inertia learned the lesson too well, and claimed himself to be "Kid Zoom", the new master of tragedies, turned over the Flash's Rogues and Zoom altogether. Employing the time stream manipulation powers Zoom granted him against his master, he reverted the body of Zoom to the crippled, broken body of Hunter Zolomon, stripping him of his powers.[9]

At some point, Hunter was broken out of prison by Eobard Thawne, and taken to the 25th century by Thawne, to work together against the Flashes. Due to being in the 25th century during the Flashpoint, Hunter remained unaffected by the changes to the timeline. He was not de-aged and retained all of his pre-Flashpoint memories, despite now existing in the post-Flashpoint timeline.[10] While in the 25th century, Hunter and Thawne gained control of the Temporal Courts, a force dedicated to investigating changes to the timeline, and Thawne used futuristic technology to restore Hunter's ability to walk.[10]

After a disagreement, Thawne ran back in time to the 21st Century, leaving Hunter stranded in the 25th Century. From the 25th century, Hunter was able to see Thawne's repeated deaths, feeling guilty for not going back to the past with him. Hunter then realizeed that Thawne had been right all along and that the Flashes did not deserve to become better heroes. This anger caused his powers to return, and his Zoom suit manifested around him.[10]

Hunter then decided to send the Renegades to the 21st century to capture Iris West for questioning for the murder of Eobard Thawne. When attempting to capture her, they were confronted by Barry Allen, Wally West and Wally West. During the battle, Wally West had a "temporal seizure". The Renegades promised to care for him if Iris agreed to come back with them, to which she agreed, although Barry and Wallace also travelled to the 25th century with them. Hunter manipulated the energy signatures of the group, separating Wally from the rest of the group. He informed Wally that all of the forgotten speedsters are lost in the Speed Force and that the only way to save them was to destroy it.[11] 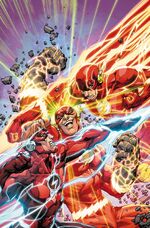 Hunter pitted The Flashes against each other

Hunter proceeded to manipulate Wally, feigning the loss of his powers and claiming that he only wished to help Wally rescue those who had been lost, in particular Wally's lost children, Irey and Jai West. Wally, after protecting Hunter from the distrustful Barry Allen and Commander Cold, proceeded to try and break the Speed Force, with Barry pursuing him. Hunter then disappeared in a flash of light, the world around him soon disappearing.[12] After the two Flashes ran fast enough to enter the Speed Force, it was revealed that Hunter's plan was actually to have the two destroy the Force Wall, which held back various energies. Appearing and incapacitating the Justice League, Hunter then explained to the two that he knew the true whereabouts of the missing speedsters, but that he'd decided to become the new Flash to protect the world. Donning the original Flash suit used by Barry Allen, Hunter demonstrated the abilities he gained from the Sage Force and Strength Force.[13]

Death and the Speed Force

Hunter later reappeared in Central City, seeking to obtain the Still Force from one of the New Force Conduits, Steadfast.[14] After stealing the Still Force, Hunter reveals to Barry that the combined forces create an entirely new force called the Forever Force, allowing him to see all of time and space. Barry gave chase, along with the Black Flash hot on their trail, intent on purging the other Forces from the Speed Force. 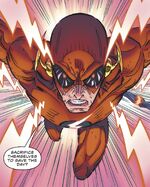 Hunter dies as a Flash

Hunter proclaimed his goal was to kill the Black Flash, as he said it's his destiny to kill "death itself" after all the tragedies in his life. Barry then showed Hunter a memory fragment in the Forever Force, explaining he investigated Hunter's case on Ashley's father, discovering Eobard Thawne played a part in the murder. Distraught by this revelation, Hunter starts to slow his pace.

Barry reminded Hunter that he broke the Force barrier by using him and Wally, so they also must find a way to repair the barrier in order to return and solve the mystery of Thawne's involvement. Hunter felt remorse for all the tragedy he inflicted on Wally, his best friend, and against Barry's pleas, resigned to fix the barrier by sacrificing himself as atonement. He wished things could have been different, but then remarked that saving the day was what Flashes do. His plan worked, and the Black Flash was also banished to the Forever Force.[15]