Icon is an extra-terrestrial superhero from the planet Terminus who protects Dakota City. Jettisoned in an escape pod after a space ship malfunction, he was discovered by a slave woman in America's Deep South in 1839. He mimicked the woman's appearance, and as Augustus Freeman, he lived through four generations. He eventually settled in Dakota City as a wealthy conservative lawyer. Though gifted with great powers, he would not use them until he encountered the idealistic teen Raquel Ervin, who felt he could become an icon to inspire others. Icon is a long-time ally of the Shadow Cabinet. He was created by Dwayne McDuffie and Mark Bright, first appearing as part of Milestone Media's Dakotaverse in Icon #1. (1993) 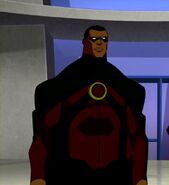