"This Immortal Destiny": This story is reprinted from DC Special Series #10.

The Search for Wotan

The Mummy That Time Forgot

Appearing in "This Immortal Destiny"

Synopsis for "This Immortal Destiny"

This story is reprinted from DC Special Series #10.

At the Tower of Fate, Inza Nelson writes in her journal and reflects upon the events that turned her husband Kent Nelson into the sorcerer Doctor Fate.

When Kent was only twelve-years-old, he accompanied his father, archaeologist Sven Nelson, to a dig in Sumeria. There, they unearthed the coffin containing the imprisoned Lord of Order, Nabu. Upon awakening, Nabu produced a poisonous gas that claimed Sven Nelson's life. He then decided to take young Kent under his wing as his apprentice. He used his magic to age him to adulthood, then spent the next several years teaching him the mystic arts. When the time came, Nabu explained that there was only one final test for Nelson to overcome. He had to concentrate all of his power upon Nabu himself. Nelson did as instructed and Nabu's mortal form was destroyed. In his true form, Nabu was a being of pure energy and he used his power to create the artifacts that would serve as the reservoir of his essence. He created a helm and a medallion and gave them to Kent so that he could protect the Earth as the sorcerer, Doctor Fate.


Appearing in "The Search for Wotan"

Synopsis for "The Search for Wotan"

This story is reprinted from More Fun Comics #56.

Doctor Fate wants to find out what happened to the soul of Wotan, after defenestrating him in their earlier fight. With Inza by his side, Fate travels into the Underworld. They traverse beyond the Seven Gates, into the region of dead souls. They encounter the essence of Wisdom who tells Fate that the evil sorcerer has escaped his doom, in some way, and still lives.

Doctor Fate and Inza return to Earth by way of the Ferryman across the River Styx. At first The Ferryman doesn't want to convey them, but Fate threatens him with incineration. Afterwards, Inza and Fate discover that Wotan is insane and creating a device that will destroy the entire world, using devices designed to alter the planet's electrical field. Fate uses his magic to communicate with a great eagle, who points them in the direction of Wotan's remote lab, in a distant mountain range.

As they enter, Wotan throws a switch intent on blowing up the Earth. Doctor Fate counters the effect with his magic, then punches Wotan twice in the jaw, knocking him out. He places him into suspended animation and leaves him in an air pocket buried deep in the Earth.


Appearing in "The Mummy That Time Forgot"

Synopsis for "The Mummy That Time Forgot"

This story is reprinted from 1st Issue Special #9. 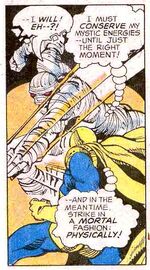 Retrieved from "https://dc.fandom.com/wiki/Immortal_Doctor_Fate_Vol_1_1?oldid=2513403"
Community content is available under CC-BY-SA unless otherwise noted.