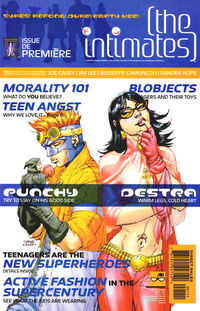 The series was known for its "information overload" storytelling style, with "pop-up" panels and "info scrolls" at the bottom of each page, providing small facts about the events taking place, such as glimpses into a character's history or random "facts." One issue featured a fake ad for the food given away at the Seminary, "chemically treated to calm ALL overactive behavior!"

The series was an instant critical hit, but would suffer from slow sales its entire life. Originally Lee provided covers and occasional panels, with Camuncoli providing the rest of the art. However, Lee's contributions became less and less frequent as the book went on, until he finally left to join Frank Miller on All-Star Batman and Robin the Boy Wonder. Camuncoli would stay on longer, but also eventually left to draw Batman and the Captain Atom: Armageddon miniseries.

Back to Comics Contents : Comics I : Intimates Vol 1

Retrieved from "https://dc.fandom.com/wiki/Intimates_Vol_1?oldid=2747439"
Community content is available under CC-BY-SA unless otherwise noted.