He was even creepier than normal. But more... more natural. He was doing something. Blending in... hiding... no, not hiding... Hunting.

J'onn J'onzz is the Martian Manhunter, one of the last survivors of the planet Mars who came to Earth in search of justice and peace.

Roughly one million years ago, Mars was a living world, populated by a race of humanoids divided by skin color. However, one day the populace received a psychic warning, which the government perceived as a threat and recruited several of its people, including a young J'onn J'onzz to investigate. While on their mission, the government agent Ma'alefa'ak unveiled a double-cross, killing all of the subjects except J'onzz and then used their blood for a magic ritual that super-empowered J'onn - permanently, against his will. 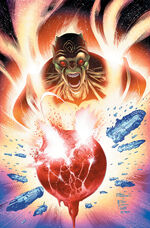 Hunting Ma'alefa'ak, J'onn discovered a monster - the cause of the psychic warning that had sent him on the mission in the first place. Taking the shape of J'onn J'onzz's son, the monster explained that it was the embodiment of the dying Martian biosphere, trying to warn the populace to help it. However, the embodiment decreed that they were unworthy, and Mars and the Martians died, throwing J'onn to Earth, where he lost himself in an infinity of identities before finally, one million years later, he attempted to become a hero once again.[1]

Soon after the formation of the Justice League, J'onn tried to join the team, under the hero identity of Martian Manhunter. Having forgotten his past, he could not give them answers about himself, which led to his brief tenure with the group ending in distrust and a fist-fight.[2]

Martian Manhunter and the Stormwatch

J'onn, not left cynical from his expulsion from the Justice League, became a member of a group called Stormwatch, who protected Earth from super-powered threats in a more "professional" (rough but functionally covert) way.

With Stormwatch, the Martian Mahunter helped fend off a war with creatures of the Moon.[3] However, finding he was not at place with Stormwatch, J'onzz attempted to leave the group but realized that they would perceive his departure as a threat to the secrecy of the group. Therefore, to prevent them stopping him, J'onn wiped their memories of his membership entirely and vanished, searching for a place where he belonged.[4]

Martian Manhunter was later contacted by Amanda Waller to join her government-funded 'Justice League of America', which, unknown to the members, was constructed to combat the real Justice League if the heroes were to go rogue. J'onn was chosen as a foil for Superman.[5]

He was imprisoned during the Crime Syndicate attack, but used his powers to free Stargirl, enabling her to help save the day. Afterwards, they founded Justice League United, a non-national superteam which could bring superheroes together.

While investigating a disappeared lunar astronaut, J'onn was attacked by foes who sparked his buried memories of his origin. Running back to Earth, he fought against an inexplicable wave of terror-bombings, dying as a result.[6] However, his remains were gathered by a disparate group, who were compelled to bring the remains to a holy site in Ghana.[7]

Teleported to a paradoxical Mars, the group discovered that they were various aspects of J'onn's psyche, split off and given bodies, and that any or all of them could become the next Martian Manhunter. However, they also discovered they were being hunted by Ma'alefa'ak, the mastermind of the scheme, who wanted to use them as magical fuel to save Mars under his rule.[8]

After much conflict with Ma'alefa'ak, the group (including J'onn himself) was able to return the martians back to the past, save the human refugees stranded on Mars, and join together once again to form J'onn J'onzz as a whole.[9]

He went to Thanagar to get more Nth Metal and rescued Hal and Mister Terrific from prison.[10]

Retrieved from "https://dc.fandom.com/wiki/J%27onn_J%27onzz_(Prime_Earth)?oldid=2807669"
Community content is available under CC-BY-SA unless otherwise noted.