JLA: Riddle of the Beast

View source
watch 22:41
Batman Character Guide [INTERACTIVE]
Do you like this video?
Play Sound
"Riddle of the Beast": 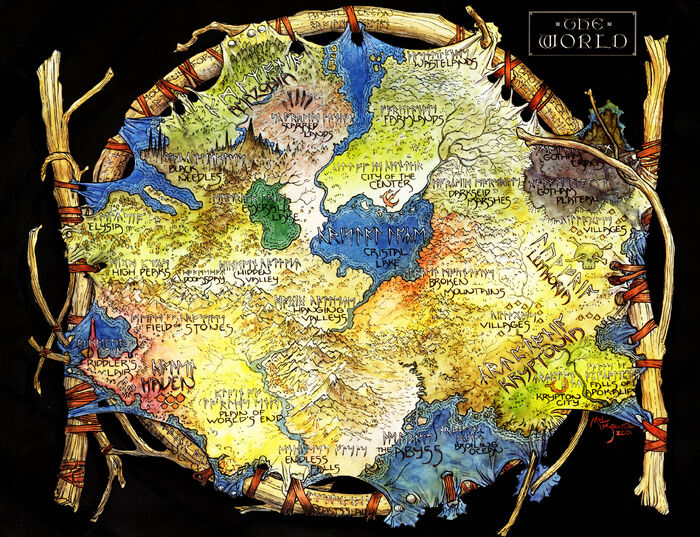 "Riddle of the Beast"

JLA: Riddle of the Beast

Riddle of the Beast

The future is ours to make as we please.

Synopsis for "Riddle of the Beast"

Set in a nameless world of starless nights, the story begins with Robin playing a board game with his girlfriend, Dinah, in the cliff-top village of Haven. A messenger bird comes along informing Robin's mother that Riddler has summoned Robin.

Riddler then informs Robin of a vision he had last night, that monsters and black-eyed goblins spewed from the depths destroying Haven. Robin insists on warning the village, but Riddler informs him it has already happened and that they are coming this way. Riddler sets Robin with the task to warn the world that the Beast has returned and they must unite here on the plains of World's End, also giving him three riddles to help him on his way.

Robin runs away only to finally return to see Haven destroyed and the corpses of his mother and Dinah.

The story then cuts to the Jester, a bard, singing that it was Jason Blood of Gotham Crags who conjured up the Beast, but the Beast instead made him his servant. The Beast then went off to wage war, allying with Luthor Rex, Starro and Jester himself. Diana was tricked that Kryptonia backed Starro's war on the City of the Centre and that Kryptonia's royals were slain. The song ends with war finally ended at Gotham Crags by the Brothers of the Night.

The next day Robin heads off towards the Portal of Bones, guarded by the ogre Doomsday in the mountains. A man approaches Doomsday for passage as he had a dream about the coming evil to Haven. Doomsday kills off the man for his flesh, his daughter is next, but is saved by Robin. Robin and the girl manage to get through as he accidentally caused the gateway to begin to fall during his fight, forcing Doomsday to hold it up. We soon learn that the girl's name is Zatanna and that her father was a magic-man.

The duo manages to get help from two Hawkmen, Katar Hol and the pregnant Shayera Tal, spending the night at their nest. The Hawkmen were the world's self-appointed guardians prior to the war with the Beast, but many were killed off at the Battle of High Peaks and are now dying off. The next day the group decide to split up, the Hawks heading north towards Amazonia, while Robin and Zatanna head towards the City of the Centre via the Crystal Lake.

Prior to reaching the Crystal Lake they meet the leonine-Green Arrow returning from a bounty with Bane's head, he informs them that he saw the Beast die as he and Jason Blood were bound and set adrift off the Endless Falls. They meet Aquan to ferry them across the lake but are soon attacked by winged-monsters and capsize, hiding under the boat the monsters believe they have drowned and fly off. In Amazonia however, the Hawks are captured by Amazons and given an audience with Diana, but are soon also attacked by winged-monsters. Katar is killed while fighting them off; the loss causes Diana to leave her pride and go to war.

Green Arrow leaves the group as soon as they arrive at the City of the Centre, stating they will meet again. Zatanna decides to stay with her Uncle Faust, but gives Robin a kiss before he leaves. Robin eventually meets the Three Men, the Fast Man, the Wee Man and the Green Man but is rebuffed due to taxes and other financial issues. Robin leaves and meets a Stranger, who tells Robin a story of how the Brothers of the Night stopped the Beast, with the cost of the Batman losing his mind after souls of the 10,000 dead harbor inside him for revenge.

Robin arrives at Gotham Crags and meets Jester. He exchanges a key he found earlier to Jester for information. It is revealed that Jason Blood and the Beast merge into one as they drop off the falls, and manage to escape into a cave. There the Beast discovers Jonzz who apparently came from the sky, kills him and turns him into a Lazarus Pit of sorts as seen by Jonzz' powers earlier. Robin is escorted to Batman's throne to inform him of the Beast returning but is rebuffed, only to be attacked by the various villains Batman had been locking away for years, released by Jester. Before leaving, Robin instead decides to make a final appeal to the souls trapped inside Batman, saying that revenge will be found at World's End.

On his way to Kryptonia we learn that Luthor has still been at war with Kryptonia and finally manages to capture King Kal'El, a sickly man since childhood who cannot even hold his arms up. Robin is sent to five years hard labor for not cheering Luthor as he dragged Kal'El down the road. After sometime Robin is freed by Zatanna who informs him that she convinced the Three Men of the Beast's return. The duo head off towards Kal'El's cell and learn that the green necklace he wore was what was making him week, fulfilling the second riddle. His newfound strength allows him to defeat Luthor and force surrender. Afterwards Robin manages to convince Kal'El that the Beast has returned.

The armies of Kryptonia, Amazonia and Luthor converge at World's End. The Central City Volunteers, a tax-free organization with strict instructions to stop fighting if the Beast showed any sign of willingness to trade, and a brigade of archers lead by Green Arrow also arrive. The war eventually begins, Kal'El shows off his powers, but demonstrates little experience, zombified versions of Robin's mother and Dinah appear but are killed off by Green Arrow, the forces are losing but Batman appears. Robin finally understands the last riddle and tells Zatanna to set the 10,000 tortured souls free, helping kill of many of the Beast's forces and the Beast himself. Batman eventually dies, as revenge was the only thing keeping him alive, he requests for people to return to Gotham Crags and fill it with the laughter of children.

During the funeral of Batman, it is revealed Kal'El and Diana are a couple. Robin requests for Kal'El to fly into the void, learning from the Jester earlier that there is life beyond the sky. Kal'El is surprised to see other suns and worlds. The story ends with Robin and Zatanna holding hands at the rebuilding of the Gotham Crags.

Appearing in "Riddle of the Beast"