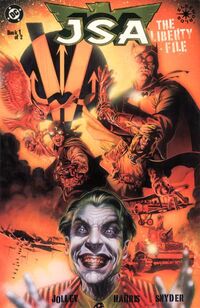 JSA: The Liberty Files is an Elseworlds two-issue limited series published in 2000, written by Dan Jolley and illustrated by Tony Harris. The series was based on characters from the Justice Society of America but portrayed them as covert government operatives in a World War II-era setting, rather than their traditional portrayal as superheroes fighting criminals.

The series later produced its sequel, JSA: The Unholy Three.

Retrieved from "https://dc.fandom.com/wiki/JSA:_The_Liberty_File_Vol_1?oldid=2686615"
Community content is available under CC-BY-SA unless otherwise noted.