This page contains information about JSA Returns: All-Star Comics (Volume 1) . As a young boy, Rex Tyler received a strange visit from someone offering him an hourglass that would one day need to be returned. 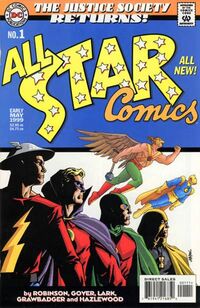 As a young boy, Rex Tyler received a strange visit from someone offering him an hourglass that would one day need to be returned.

Later, Rex found himself working the war effort to create a truth serum. When he found a coworker stealing research, he consumed Miraclo transforming himself into Hourman. He found seven disciples who summoned The Stalker. The Stalker wanted revenge on his creator, War. He wanted to destroy that which powered him by ending all life. If there were no people, there would be no more war. He created seven disciples to aid him, and sent them to various spots around the world to distract the JSA as he recovered from his injuries.

The JSA split up in groups to defeat the disciples.

Later, Hourman realized Stalker's power was derived from order as well. Since time is order, he destroyed the hourglass that was given to him. With order destroyed it became chaos and the Stalker would have no power. The Stalker then devolved back to his original mortal state.

Years later, Hourman's youth was stolen in a battle. The younger version of himself returned once again. Upon returning the hourglass to him, he revealed his true form as an android decedent of himself in the future, Matt Tyler. The new JSA superheroes were then bathed in residual energy that would keep them young for many years.

Retrieved from "https://dc.fandom.com/wiki/JSA_Returns:_All-Star_Comics_Vol_1?oldid=2385396"
Community content is available under CC-BY-SA unless otherwise noted.