Jade is a superhero imbued with mystical green energy. Her father was the original Green Lantern, and his connection to the Starheart energy through his power ring was passed down to her, giving her a physical connection to the light. Her mother was the super-villain Thorn, who gave her up for adoption at a young age along with her brother Obsidian. Although Jade died during the Rann-Thanagar War, she was resurrected during Blackest Night. She has been a member of Infinity Inc., the Justice Society, the Justice League, the Green Lantern Corps, the Outsiders, Blood Pack and the Black Lantern Corps. Jade was created by Roy Thomas and Jerry Ordway, first appearing in All-Star Squadron #25. (1983) 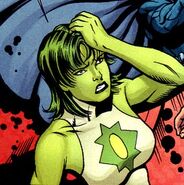