The White Horse of Pestilence

Jade Nguyen, also known as Cheshire, is a dangerous assassin.

Jade's origin before becoming an assassin is shrouded in mystery, having trained with the League of Assassins for many years as a member. She was present at their headquarters for Jason Todd's training after his death as Robin and resurrection by Talia al Ghul. [1]

League of Assassins vs. The All-Caste

Sometime after Jason Todd had returned to Gotham and became the Red Hood, she seemingly accepted a contract to hunt him and his gang of Outlaws. After incapacitating Starfire with an explosive gas trap, [2] she fought Arsenal, Red Hood, and Green Arrow before retreating (with Arsenal's baseball cap as a souvenir). She returned to the League of Assassins and reported on her mission, having actually been assigned to test Arsenal and Starfire's strengths for later confrontation. [2] 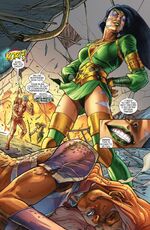 Cheshire vs. the Outlaws

Later, Cheshire and other agents of the League made their play on Red Hood, defeating him and transporting him back to their base at 'Eth Alth'eban to aid them in their war against the All-Caste.[3] With no choice, Jason agreed to join them but soon discovered that the Outlaws had begun an attempt to rescue him.[4]

Using her teleporting bracelets to once again battle (and flirt) with Arsenal, she was defeated by the archer when he successfully disabled her bracelets, teleporting her thousands of feet in the air and needing to be saved by a team member. Despite this victory, the Outlaws were still defeated, and Cheshire was tasked with imprisoning and watching over Arsenal. [5]

The war between the League and the All-Caste had reached its climax and Ra's al Ghul, leader of the League, revealed his ultimate goal to destroy the world. Disagreeing with her leader's intentions, Cheshire defected and freed the Outlaws, swearing to put the League behind her and to one day see Arsenal again. [6]

Jade would partially keep her promise, at some point beginning a relationship with Arsenal that ultimately fell apart.[7] 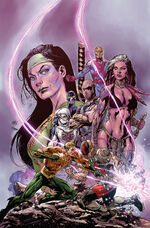 Some time after abandoning the war between the All-Caste and the League, Cheshire had formed a team called Mayhem alongside other professional criminals, choosing to set up their secret base in an abandoned research station on the Moon.

The supervillain team ran into opposition of Aquaman and the Others as they tried to secure a flash drive containing old Soviet satellite missile launch codes.[8] Jade and Mayhem succeeded in getting the flash drive, but, back at their base, Cheshire and NKVDemon argued over what to do with the codes - the former wanting to wait for the right time and the latter wanting to use them immediately to rule the world. Though Cheshire's allegiance was questioned, considering she was a mercenary, they agreed to think out their next move. [9]

Mayhem decided the best use of the first missile was to wipe out Aquaman and the Others for opposing them, but this backfired, when the Others discovered Mayhem's location and teleported them to the ocean to battle. [10] During the fight, Aquaman used the location to his advantage and incapacitated Jade under water before defeating the rest of Mayhem.[11]

Cheshire briefly reappeared when she was among the super-villains that was influenced by Xa-Du with an irresistible urge to kill Clark Kent. She intercepted the hero in the Bahamas, bringing an army of Man-Bat Commandos from the League of Assassins as well as Bane and Killer Croc to help her. Batman and Superman teamed up and successfully defeated Cheshire, turning her into the authorities. [12]

Jade, on the loose once again, was one of the many assassins that attempted to collect the price on Batman's head as he and Two-Face traveled cross-country to discover a cure for his disease. Though Cheshire made a play on the Bat's life, she ultimately failed, and the pair escaped. [13] 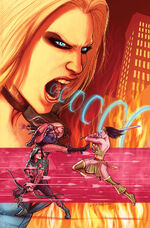 Soon after, she was hired as one of the Four Horsemen, a key part of the Ninth Circle's plan to overrun Seattle. Cheshire was assigned to terrorize the Seattle-Tacoma International airport and casually spent the day walking around it, subtly poising people, including pilots, with her nail polish. The effects of her poison were felt during several flight, causing 3 planes to crash, killing at least 537 people and grounding all flights out of Seattle.[14]

Cheshire continued her contract with the Ninth Circle by poisoning a water treatment facility that would have caused everyone in Seattle to "[suffer] brain damage, make their hair fall out and their skin rise into scabs." While doing so, she was interrupted by Red Arrow and Arsenal. Unable to fight both at the same time, she threw a smoke bomb and left.[15]

Cheshire and Arsenal had a rematch soon after as Team Arrow tried to reconnect with their leader in the final battle for the city. Though this time Cheshire defeated Arsenal and prepared to finally kill him, she was stopped by Black Canary. Again, Cheshire got away.[16]

Later, Cheshire attempted to collected a bounty that was put on Wonder Woman using Amazon-strength sedative but was defeated by the hero. [17] 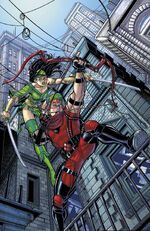 A final fight with Arsenal

After that, Cheshire was hired by the Brotherhood of Evil to steal a sample of a new drug called Bliss concurrently while Arsenal was investigating it. Cheshire played him into helping her, poisoning him during a sexual encounter and leading him to believe he had relapsed on drugs.[18]

Soon after, still under the employ of the Brotherhood, she helped defend the team leaders Monsieur Mallah and The Brain from the Titans, focusing her sights once again on Arsenal. The archer was again defeated, and Cheshire almost executed him, but she was again stopped at the last second, this time by Donna Troy. When Donna had bested her in battle, Cheshire demanded to be killed instead of captured, but Arsenal captured her with a trick arrow anyway. [19][20]

Cheshire secretly attended Roy Harper's funeral after he was killed at Sanctuary, standing away far from everyone else in the back of the crowd. She looked inexpressive at the loss of her arch-nemesis and former lover, yet shed a single tear.[21]

Retrieved from "https://dc.fandom.com/wiki/Jade_Nguyen_(Prime_Earth)?oldid=2814603"
Community content is available under CC-BY-SA unless otherwise noted.