Jaime Reyes is the Blue Beetle, a young hero fused with a Reach scarab.

Booster Gold invited Beetle to join the Justice League International alongside the Olympian. Beetle mistakenly thought it was the regular Justice League, as he needed help from Cyborg. They were soon attacked by Brother Eye controlling OMAC, and Eye had Beetle teleported to the Reach homeworld while he destroyed the team.[2] When the Reach attacked Odym, homeworld of the Blue Lantern Corps, it was revealed that their armours have taken control of them; Jaime speculated, during a confrontation with Kyle Rayner, that his armour was damaged, explaining why he was in control of himself where as the other Reach soldiers were enslaved to their armour.

After being captured by Lady Styx's henchmen, Jaimie was forced to take part in the bounty hunter game, The Haunted, on the planet called Tolerance.[3] After losing control over the Scarab armor[4] and regaining control back, he teamed up with a New God named Lonar,[5] to kill the creator of the game Adonis and escape the planet. Lonar killed Adonis, took his pocket dimension, and disappeared.[6] Thereafter, the producer of The Hunted revealed that the show had been cancelled and sends Jaime back to earth.[7] 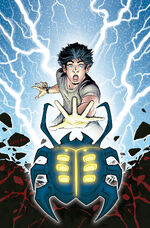 As such Jaime never became Blue Beetle until much later, all of his heroic stories being erased from the timeline.[8]

Jaime Reyes was born to Alberto and Bianca Reyes, he grew up a normal child like many others until one day changed his life forever. Jaime was hanging out with his school friends Brenda and Paco by the river in his home town El Paso the day before school began. His friends were arguing when they noticed the scarab floating on the water, when Paco went to investigate it started shocking him prompting Brenda to help him causing her to be affected as well. The scarab then attached itself to Jaime, forcing him to become its host body.[9]

Not knowing what to do with the unknown scarab creature Jaime turned to scientist and C.E.O. of Kord Industries Ted Kord for help. The pair soon learned that the scarab was of alien origin and was partially sentient as it communicated with Jaime in his head. Kord suggested Jaime should use the scarab's power for good as they occasionally ran tests on the strange device. Jaime begrudgingly agreed and decided to take up Ted's old mantle of Blue Beetle with Ted acting as his tech support.[10] 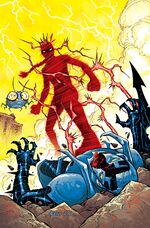 into action. He travelled to a restaurant where two super-villains were calling for his blood. He attacked the two villains- Rack and Ruin but was quickly overwhelmed by their regenerative abilities. Ted stepped in firing a gas missile into the restaurant forcing the two villains to flee.[10] Over the next few weeks Jaime began having dreams of the sorcerer supreme Doctor Fate attempting to kill him. One day after school Jaime saw Ted conversing with a member of the metahuman street gang the Posse. Kord told him that he received a tip from the gang about the whereabouts of 3 different students. Travelling to one of the missing students' houses he discovered that the place had been wrecked and there was a giant hole in the ground. Jaime was then attacked by a figure who could shift through shadows, Jaime defeated the figure calling himself Blot who turned out to be one of the missing children. When he attempted to apprehend Blot the Posse intervened.[11]

The Posse told Jaime that the hole found in the house was one of three, each one found at the location of a missing student. Blur then took Blot to be looked over by Jaime's mother, who was revealed to be helping the Posse's cause by stitching them up. Blue Beetle then investigated the hole as the Posse left the scene, finding nothing Jaime became irritated as Blur of the Posse was following him around everywhere. After accidentally shooting Blur with his plasma cannon the two got into a fight, the fight ended with Jaime shocking Blur to unconsciousness. Jaime then headed home to confront his mother about the Posse.[12]

Retrieved from "https://dc.fandom.com/wiki/Jaime_Reyes_(Prime_Earth)?oldid=2878529"
Community content is available under CC-BY-SA unless otherwise noted.