James Gordon, Jr. is the son of James Gordon and Barbara Eileen Gordon. In contrast to his father's work in the GCPD as an ally to Batman, James Jr. is a psychopath and remorseless killer.

Barbara Eileen and James Gordon conceived James Jr. shortly before arriving in Gotham City while they were still living in Chicago.[1] Gordon quickly attracted the wrath of mobster Carmine Falcone and a hitman named Johnny Viti was sent to kidnap his infant son. James Jr. was thrown off a bridge and only rescued by the timely intervention of Batman.[2] It has been speculated since then that damage from this fall might have been the cause of his psychopathic tendencies as an adult.

From a very early age, James Jr. showed signs of being different. He would kill animals and take them apart as a hobby. In one particularly disturbing incident, he was implicated in the disappearance of one of his sister's friends. 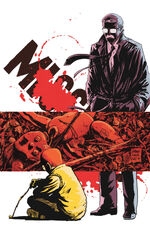 Lost Boys
While their family was on vacation, Barbara's friend Bess Keller teased James Jr. and was never seen again after wandering into the woods. Barbara swears that she saw James carrying her keychain, although this was never proven.[3] It was explained that his threats might have been responsible for his parents splitting up.[4] He was mentioned having left Gotham to travel around the country at some point.[5]

When James Jr. returns to Gotham after many years, he begins secretly following his father.[6] Barbara warns Commissioner Gordon not to trust him, but James Jr. confronts his father in a diner.[7] He explains that he has started to take medication for his psychopathic tendencies, and is trying to turn his life around. James Jr. announces he is planning to get a job helping the other mentally ill at Leslie Thompkins' clinic, and asks his father to set him up with a recommendation from Dick Grayson.[5] Hunting down old cases, Commissioner Gordon meets another murderer who might have been responsible for the death of Bess Keller.[3]

His meeting with Grayson goes successfully, but it is revealed that James Jr. is still actively torturing people to death.[8] Leslie Thompkins insists that James Jr. is doing a great job, but his father suspects otherwise and has Barbara test his medication. They discover that James Jr. has reversed the formula to increase psychopathic tendencies, and correctly deduce he was going to poison an infant nutritional facility.[9]

"Not this time, James."
Barbara Eileen Gordon is attacked with Joker toxin when the Joker escapes from Arkham Asylum, but it turns out James Jr. was using this as a diversion to kidnap his sister.[10] Batman attempts to find them, and James Jr. explains that he has been orchestrating things for a long time as he figured out Batman's secret identity. He aided the super-villain Dealer and even broke the Joker out of Arkham. Believing that empathy makes you weaker, he seeks to destroy Batman as the "weakest man in Gotham" by showing him the error of his ways and creating a new generation of psychopaths. Barbara stabs him in the eye, then Batman bursts through the window and reveals he injected him with a tracking device. James Jr. tries to run away but his father shoots him in both legs and stops him from falling off a bridge. It was left ambiguous whether or not his plan actually succeeded, although it was implied that it did.[11]

Retrieved from "https://dc.fandom.com/wiki/James_Gordon,_Jr._(New_Earth)?oldid=2735866"
Community content is available under CC-BY-SA unless otherwise noted.