I guess I thought about what would happen if everyone gave up-- if nobody was willing to take the risks to fight crime! Somehow, I felt that if I didn't do my part to help people, then I couldn't expect anyone else to!

James W. "Jim" Gordon was the commissioner of the Gotham City Police Department. In this capacity, he was a staunch ally of the Batman and the Batman Family. Gordon was also the father of Barbara Gordon, who worked secretly as Batgirl.[4]

Besides his work as Police Commissioner, Gordon was also a member of the Mystery Analysts of Gotham City, who were a group of high-profile detectives that gathered together to solve any sort of mysteries.[5]

Early in his career, Lieutenant Gordon became involved in the investigations against Lew Moxon and later, the murder of Thomas and Martha Wayne.[6]

As head of the Police Department in Gotham City, Gordon solved some of some of the most remarkable crimes in the city. Gordon was a main figure in the Schemer's plan to steal a large shipment of gold by making Gordon think that Batman was dead. As expected, Gordon believed that any Batman that showed up was an impostor and he soon arrested the real Batman. Fortunately, Batman broke free and when Gordon chased him down, he finally captured a real impostor, member of the Schemer's gang and thus, Gordon finally learned the truth and nabbed the crooks with Batman's help.[7] Gordon was then victim of Mr. Esper's subliminal manipulation and caused Batman and Robin to fall for Esper's trap. Eventually the heroes captured Esper, but Gordon never knew of his involvement in the situation.[8]

Gordon was later kidnapped and his life endangered by a vengeful martial artist, who sought revenge against Batman by murdering Gordon. Batman managed to locate Gordon and saved him from a certain death.[9] However, Gordon was forced to turn against Batman when all the evidence on a murder case pointed to the masked hero. Gordon organized the GCPD against Batman, but the Dark Knight soon cleared his own name and Gordon allowed Batman to work alongside the GCPD once again.[10]

Not long after this, Gordon and Batman started working to bring The Joker to justice, but Batman made his confrontation with the madman personal. Gordon had to step in and prevent Batman from killing the Joker.[11]

When a new mayor of Gotham was elected, he forced Gordon into retirement and placed a different man as Police Commissioner. However, when the GCPD were stymied by a common criminal, the Mayor was forced to call Gordon and rely on his experience to handle the case. Gordon worked together with Batman and risked his life to capture the criminal. After this heroic display, Gordon was reinstated as Police Commissioner.[12]

Gordon also spent a great deal of his private life at home with his daughter, Barbara. During these times, he realized that Barbara was always close to certain crimes, like the time Jason Bard was framed for murder[13] and when a gang of "wig killers" were captured.[14] For these reasons, Gordon became aware that Barbara was hiding something, and he finally realized the truth after the murder of a rookie police officer. Gordon had decided to track down the killer, but his investigation was disrupted by a fake Batgirl and then the real Batgirl saved his life.[15] Gordon managed to gather enough police officers to capture the killer with help from Batgirl and the whole case was wrapped up when he deduced his daughter secret identity as the law enforcer Batgirl. Gordon decided to let Barbara continue her adventures as Batgirl, but he longed for the day when she would finally reveal her secret to him.[16]

Gordon's wish was soon fulfilled when Barbara finally revealed the truth to him. This happened just as Gordon was nominated by some activists in Gotham for Congress. He had expressed his refusal to Barbara and she took the opportunity to volunteer to the charge in his place and when this happened, she opened up to him about her crime-fighting career.[17]

Eventually, Gordon was forced to put out an arrest warrant against Batman for the murder of Talia, the daughter of the master criminal Ra's al Ghul.[18] Gordon even asked Bruce Wayne to use his influence in order to capture Batman.[19] Eventually, Gordon learned that Batman had been framed when the Dark Knight took Talia to the authorities. Gordon learned about Ra's al Ghul's conspiracy to turn Batman into an outlaw and after gathering all the evidence, Gordon dropped all charges against Batman.[20]

After this whole affair, Gordon assigned Batman to protect possible victims of a murdered, but when Batman failed to provide such protection, Gordon lost faith in him and took him off the case. Soon, Gordon's unfaithfulness proved to be a mistake when Batman captured the culprit and revealed that the victims were safe and sound. Gordon's faith in Batman was restored and their collaboration continued.[21]

After this, Gordon and Batman worked together to stop the Underworld Olympics that took place in Gotham.[22][23][24][25] Gordon was eventually kidnapped by some criminals, who tried to learn Batman's secret identity from him. Gordon, however, had a contingency plan with Batman and they managed to capture the crooks and provided a fake identity.[26]

Gordon was eventually affected by the poisoning of Gotham's water supply by the evil Dr. Phosphorus[27] and he shared room at the Gotham General Hospital with Bruce Wayne's butler, Alfred, who had also been affected.[28] After Gordon received a bomb letter, he was taken to a hospital, where someone tried to finish the job. Fortunately for him, Batgirl was in town to locate the criminals and took them to the authorities.[29]

Gordon was next kidnapped by the Joker along with other allies of Batman in an attempt to lure Batman into a trap. Gordon and the other hostages were promptly saved by the Dark Knight, but the Joker was not captured.[30] When the Gotham State Penitentiary was taken over by inmates, Gordon was the only officer capable of regaining control of the prison.[31]

During election times, Gordon was almost killed by his opponent for the job of Police Commissioner. Gordon was then re-elected as police commissioner, when the people learned about his opponent's murder attempt on him and the Batman. However, it was Batman who uncovered the truth and saved Gordon from a certain death, proving that Gordon's trust in Batman was justified.[32] When Barbara Gordon was framed for murder, James used his influences to have her released on parole, allowing Batgirl to clear Barbara's name.[33]

When Hamilton Hill won the Mayoral Election in Gotham, he made good on his campaign promises and demanded Commissioner Gordon's resignation.[34] Without much of a choice, Gordon complied and resigned after a lifetime of service. Hill, who was controlled by crime boss Rupert Thorne, soon appointed Thorne's right hand, Peter Pauling and the new Police Commissioner.[35]

Without his job, Gordon lost his motivation[36][37] and Barbara called her friend, Jason Bard to help him. When Bard informed Gordon that Pauling and Hill planned to force retire most of the GCPD, Gordon agreed to work together in Bard's detective agency.[38] Their investigation lead them to the reporter Olivia Ortega, who provided them with evidence of the documents used to make Hill win the election.[39] After interrogating specific suspects,[40] Gordon and Bard were attacked by members of the GCPD under the instructions of Commissioner Pauling.[41] This caused Batman to get involved in the investigation and as a result, a deranged Rupert Thorne murdered his own pawn, Commissioner Pauling.[42] With Thorne arrested and Pauling dead, Mayor Hill had no choice but to reinstate James Gordon as Police Commissioner.[43]

Soon, Gordon started showing signs of heart complications[44] and Mayor Hill decided to give him an assistant.[45] Much to Gordon's dismay, this person was none other than Harvey Bullock, a former officer who he had suspended.[46] Bullock managed to outperform Gordon, which caused Gordon to be looked down by the public eye.[47] Despite this, Batman's support of Gordon made it hard for Bullock and Hill to break the Commissioner's determination.[48] 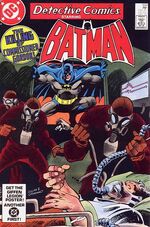 The Killing of Gordon

However strong Gordon's determination was, his body became weaker every day until he had a stroke after a nasty prank by Bullock.[49] Gordon was soon hospitalized and he fell into a deep coma.[50] When word spread about his condition, a group of criminals with a grudge against Gordon tried to murder him at the hospital. James Gordon was saved thanks to the combined efforts of Batman, his daughter Barbara and a reformed Harvey Bullock. After this successful mission, Gordon recovered from his coma.[51]

Upon his return to the work, Gordon was surprised by Harvey Bullock's change in attitude, as the man started to work for good[52] and they started working in good terms.[53] Their alliance infuriated Mayor Hill, who tried to murder Bullock for his betrayal. When Batman investigated Hill, the Mayor suspended Gordon from the GCPD and declared Batman a public enemy before shooting Bullock himself.[54] During Gordon's suspension, he went to the hospital to stay in Bullock's room until his friend recovered and there was no longer a threat against him.[55] Shortly after, Gordon joined the rest of the GCPD on the unmasking of the Night-Slayer as the fake Batman and the exposure of Mayor Hill's crimes, which in turn caused Gordon to be reinstated as the Police Commissioner.[56]

Later, Gordon was suddenly threatened by a villain called Wrath, who had a personal grudge against him. With Batman's assistance, Gordon was saved and Wrath was stopped, although he died in the final confrontation.[57] Due to Batman's assistance, Gordon gladly agreed to let Catwoman start her vigilante activities in Gotham under Batman's request.[58] He also allowed Batman to tackle the international terrorist called Dark Rider.[59]

After the events of the Crisis on Infinite Earths, James Gordon's existence and history was completely altered, transforming him into a different person, existing on a different reality.

Retrieved from "https://dc.fandom.com/wiki/James_Gordon_(Earth-One)?oldid=2806890"
Community content is available under CC-BY-SA unless otherwise noted.