This is our city. And when Hell is unleashed, we don't run and hide, we stand up. And there's a symbol, a symbol we all know stands for what we can do. What we are capable of. Tonight needs more than just one hero. It needs a city. It needs all of us. Tonight we need to do what he does for us every night. Tonight, we all need to be Batman.

James Worthington "Jim" Gordon is the commissioner of the Gotham City Police Department and an ally to Batman. He is the father of Barbara Gordon and James Gordon Jr., and he is the ex-husband of Barbara Eileen

When Gordon was fourteen, he broke his femur while jumping a fence to escape a truant officer.[1]

Chicago-born James Gordon was a former marine[2] and officer in the Chicago Police Department. After his wife divorced him, Gordon left his hometown with his daughter and headed east to Gotham City, where he hoped crime would be more manageable.

Three weeks after transferring, Gordon and his partner Dan Corrigan were sent to pick up a young boy named Bruce Wayne, who had skipped school to watch a movie. With Bruce in the police car, Gordon received a free trench coat from a local shopkeeper, not realizing it had been a bribe. Figuring out his mistake later that night, Jim returned to the shop to find a group of corrupt police officers and petty criminals betting on dog fights, with Corrigan, his partner, leading the bets. Gordon threatened to turn all of them in but was forced to back down when Corrigan, in response, threatened Gordon's daughter. After leaving the shop defeated, Gordon heard two gunshots down a nearby alley and was the first officer to arrive at the crime scene where Bruce Wayne's parents were murdered.[3]

When the mysterious vigilante known as the "Batman" started to appear in Gotham, Gordon, now a lieutenant, reacquainted himself with Wayne, only to discover that the man held a grudge against him, believing Gordon was as corrupt as everyone else on the police force.

Later, Lieutenant Gordon, investigating the crimes of the Red Hood Gang, was tipped off to the gang's plans by Wayne, rushing into apprehend the criminals at Ace Chemical Processing Plant. Discovering Batman there, Gordon attempted to put the vigilante under arrest, but Batman escaped. Gordon, sympathetic to Batman's cause, ordered his men to apprehend the real criminals - the Red Hood Gang - instead. 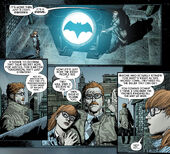 Gordon lights the Bat-Signal for the first time

With the Red Hood Gang stopped, the Riddler finally stepped into the spotlight and enacted his plan for "the Zero Year". Challenging Batman and forcing Gotham into a blackout only hours before a major hurricane, Gordon attempted to organize the police force, despite opposition from its corrupt commissioner Gillian Loeb. With Loeb seemingly killed as Riddler's plan continually escalated, Gordon took an even more managerial position as he worked directly alongside Batman to take Gotham back from the Riddler's control.

After Nygma was finally defeated by the two heroes' teamwork, Gordon was promoted to police commissioner in Loeb's absence, his goals including rooting out corruption and working closer with Gotham's protector. Soon after his promotion, Gordon had the Bat-Signal installed on the roof of GCPD Headquarters.

Years after, Jim worked with Batman to investigate the mystery of the Joker having his face cut off. Gordon was then captured by the villain Dollmaker as revenge for him killing his father many years ago. He was rescued by Batman before Dollmaker had a chance to kill him.[4]

After Batman dove into an investigation into the mysterious Court of Owls, the organization unleashed their assassin Talon army on Gotham to purge the city of those deemed unworthy; Gordon and the police department were pushed to their limits to save as many civilians as they could. The commissioner, having ignored the Court's threats to hold back the police, was targeted by a Talon but was thankfully saved by Batgirl.[5] In time, the Court was defeated, and the city was reclaimed by the Bats.[6]

A year having passed since the disappearance of the Joker, Gordon was attacked by the clown in GCPD Headquarters when the Joker came to retrieve his severed face skin from police lock-up. Gordon was later hospitalized after it became apparent the Joker had poisoned his possessions with Joker gas.[7] Gordon eventually recovered but was deeply scarred by the villain.

When the Crime Syndicate apparently killed the Justice League and condoned all criminals to walk free, Gordon found himself caught in the middle of a war between villains in Gotham City. Later called "the Arkham War", Gordon was forced to survive on the streets as a refugee when the freaks of Arkham and Blackgate fought each other for control of the city. Though he attempted to be a hero when he could, Gordon was no match for the warfare until Batman finally returned and took back the city from the villains. 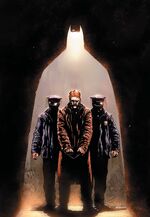 After a mysterious benefactor began a yearlong plan against Batman, Gordon became one of the first pawn's in the grand scheme. Commissioner Gordon, after chasing Professor Pyg and his cronies into a Gotham subway station, ordered one of the thugs to lower his gun, despite the criminal claiming not to have one. Taking the shot at the criminal's weapon, the bullet phased right through the weapon and hit a vital transformer behind it, causing two train cars to collide and kill a group of civilians inside. Upon reviewing the security tapes, it was revealed there really was no gun, and Gordon was arrested and sent to Blackgate Penitentiary for the innocent deaths he had accidentally caused.

While in Blackgate, Gordon was reunited with his estranged son who volunteered to help his father breakout, but Jim refused his offer.[8] Soon after, mob boss rivals Carmine Falcone and the Penguin were captured and also sent to Blackgate and continued their gang war in the prison, causing a major riot. In the chaos, Gordon worked to save as many prison guards as he could and learned that his cellmate Leo was actually the former crime boss Rex "the Lion" Calabrese.

With the investigation into the plot against Batman intensifying, Batman and his allies found evidence to suggest that Gordon had been framed for the deaths and that he was brainwashed into thinking there was really a gun. The new commissioner Jason Bard, secretly a pawn in the real villain's plot, destroyed the evidence that would clear Gordon.

Near the conclusion of his year in imprisonment, Gordon found himself caught in another riot orchestrated by the Penguin, but, this time, the criminal made Gordon the prime target. Saved only by Det. Harvey Bullock and Jason Bard, who had a change of heart, the three escaped into the streets of Gotham as the city went up in flames - the yearlong plot had reached its climax, and Gordon organized all the civilians he could in support of Batman as the hero faced the mastermind behind everything.

With the city back to normal, Jim Gordon was restored to his rightful place as police commissioner but was immediately surprised by the initiation of the Joker's endgame. The Joker, having returned to Gotham intending to finally kill Batman, surprised Gordon in his apartment, but the commissioner managed to shoot him several times before he could get too close. Though he thought he had finally killed the Joker, Dionesium in the clown's bloodstream caused him to survive and plunge an ax into Gordon's chest, simultaneously infecting him with Joker Venom. Jokerized Gordon attempted to kill Batman but was subdued by Julia Pennyworth long enough for them to escape.

In their final confrontation, Batman and the Joker killed each in the caves beneath Gotham and the remaining Bat family managed to spread the cure to Joker's toxin throughout Gotham, healing Gordon. 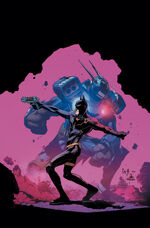 Jim Gordon - the new Batman, and his robot batsuit "Rookie"

In the wake of Batman's apparent death against the Joker, plans for a new Batman were discussed, with Powers International laying the groundwork for a Batman-inspired task force. Their first candidate chosen to model the program was Jim Gordon, who was initially hesitant to fill Batman's shoes but eventually agreed. Going through intense government training and getting surgical muscle implants, Gordon was given the first model of the new Batman robot-armor, which he nicknamed "Rookie", and took to the streets as the new Batman.[9] By complete chance, he finds Bruce Wayne and informs him he has taken up the reigns as Batman.

The Batman Who Laughs

As Gordon hears several different reports about Bruce Wayne being found dead throughout Gotham, he works with Batman to figure out that a Batman from an alternate dark universe (known as The Batman Who Laughs) is the one responsible. Tracking him down, Gordon seeks help from his estranged son James Jr.; however, another dark version of Batman arrives and introduces himself as The Grim Knight.

Learning that Batman has been infected by the Batman Who Laughs, Gordon and James are tasked to protect the Batcave from the Grim Knight, who is on his way. With each one donning a Batsuit, they briefly get the jump on the Grim Knight. However, the Grim Knight uses Gordon's own words against him and seemingly sway James Jr. to his side. As he is strangled by the dark Batman, Gordon notices a vial of toxin poured into the water and the Grim Knight begins to drown him in the water; taking several gulps of the poisoned water, Gordon is saved by James stabbing the Grim Knight repeatedly in the shoulder and back. Gordon consoles his son and affirms that he loves him.

However, due to being subjected to a small dosage of the toxin, Gordon slowly begins to exhibit traits similar to The Batman Who Laughs. 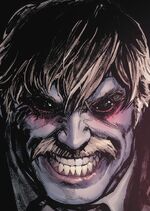 The Infected: The Commissioner

Roughly a year passes after the Batman Who Laughs is imprisoned within the Hall of Justice and Gordon is able to maintain his act, fooling Batman into thinking he was not subjected to the toxin. As Batman works with Superman to figure out what the overall plan of The Batman Who Laughs is, Gordon is able to establish contact with four other heroes the villain was able to infect as well: Shazam, Donna Troy, Hawkman and The Blue Beetle. During one of these sojourns, he gains access to his old 'Rookie' suit of armor and programs it to view Batman as a hostile.

As Batman manages to track down Gordon from a clue left by the Batman Who Laughs, Gordon gives up his facade and mocks Batman for being right under his nose the whole time. Belittling the Caped Crusader for all the cops who died throughout the years because of him, Gordon activates Rookie but is stopped from killing Batman due to Superman arriving and blocking the bullets. After mocking Batman for Superman figuring out he was infected, both Gordon and Rookie are defeated and taken to the Fortress of Solitude.

Gordon is able to escape confinement and works with Hawkman and Donna Troy to beat back Superman and Batman. He then signals to Blue Beetle and triggers the destroyed Rookie armor to bond with him. After Superman is saved by the actions of Supergirl (with her becoming infected instead of Superman), Gordon notes that The Batman Who Laughs' plan was slightly altered due to the change, but it ultimately does not matter: with all six becoming infected, they can now move on to the next stage of the plan.

Retrieved from "https://dc.fandom.com/wiki/James_Gordon_(Prime_Earth)?oldid=2735863"
Community content is available under CC-BY-SA unless otherwise noted.