I could give in to the fear and run away...But that's just it...fear is easy. Hope is hard...and I'm always up for a challenge!

Jason "Jay" Garrick was a speedster and founding member of the Justice Society of America. As a result of Doctor Manhattan's alterations to the timeline, Jay became trapped in the Speed Force and forgotten to all.[1] After Manhattan had undone his edits to reality, Jay and the rest of JSA had been rewritten into the timeline so that they had always existed.[2]

During the year 1940, Jay operated as the Flash in Keystone City. As a result of the altered timeline, Wonder Woman became the world's first superhero and inspired Garrick, who was amidst an existential crisis, to do more to help people by fighting the Nazis in Europe. While facing Thinker, he heard a mysterious voice that warned everyone will forget him. After defeating Thinker, he realized that he was meant to become part of something bigger.[3]

Battling the Legion of Doom 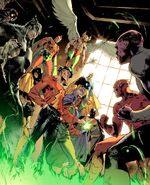 The Justice Society encounters their successors

Jay and the rest of the Society encounter John Stewart and Barry Allen.[4] Jay expresses surprise about their being another Flash. He, the other society, John and Barry go to Pearl Harbor, shortly before is attacked by the Japanese.[5] He and his allies battle the Legion of Doom and the Japanese forces under their control, before Aquaman shows up.[6] 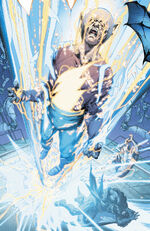 When Barry Allen and Batman raced through the Timestream after Eobard Thawne, Jay attempted to call out to Barry from inside the Speed Force. After finally getting Barry's attention, Jay was able to break through and use his speed to get Barry, Bruce, and himself out of the timestream and back on Earth.[1]

After getting back on Earth, Jay began slowly fading back into the Speed Force. He introduced himself to Barry, who had no idea who he was, trying to get him to remember him, as he did with Wally West. Jay told Barry that someone took everything from him and he didn't know why. Just before fully fading back into the Speed Force, Barry grabbed Jay's arm and attempted to save him from fading away, although just as he grabbed him, Jay was teleported away by a blinding blue light.[1]

It was revealed that the Justice Society of America had been erased from history due to Dr. Manhattan causing Alan Scott's death. Since Scott was the major lynchpin behind creating the JSA, his death meant the group never existed in the first place.

Dr. Manhattan however undid his actions after getting inspired by Superman, causing Scott to survive and becoming a superhero, restoring the JSA along with Garrick back into the timeline. The team came to assist Superman in stopping the metahuman battle in Washington, D.C.[2]

Manhattan's attempt at fixing the timeline and reality failed however, as they merely re-adjusted into a new version. Jay returned to the present timeline along with other Justice Society members when Wally West, having gained the powers of Dr. Manhattan and acquiring the Mobius Chair, attempted to fix time by merging the various timelines, but he was now significantly old.[7][8][9]

Jay was restored to the timeline but had lost his memories, which he later recovered. He had also married Joan and though they didn't have kids of their own, they treated Barry and Wally as their own sons.[10][11] 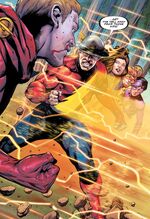 The return of Jay Garrick

Wanting to talk to Barry after recovering his memories, he tracked him down using the Speed Force, but found him threatening Iris West, Avery Ho, Wallace R. West and Bart Allen. He knew the man couldn't be Barry and found that Eobard Thawne had taken control of his body, while engaging in a brawl with him and telling the others to stay back. Just at the moment when Thawne outmatched his opponent, he was struck with great pain due to Barry trying to take back control of his body. The reunited Flash Family then arrived at Central City's graveyard to stop Thawne and his Legion of Zoom recruited from various points of timelines, from taking Nora Allen's body, after getting a tip from the Trickster, James Jesse.[12]

The Tornado Twins soon attacked them but returned to their time after regaining their memories. As Thawne directed the remaining members of his legion to attack, Barry started taking control of his body back. Gorilla Grodd encouraged the other members to kill him, which would allow them to kill both Thawne and Barry, but they were stopped by Jay and the Flash family. As Barry, took back control and brought Jesse Quick as well as Max Mercury out of the Speed Force, Thawne revealed that he had far more Flash Villains across the timeline for his Legion of Zoom than they knew.[13]

As Jay and others struggled to battle the Legion of Zoom, Max Mercury meditated and brought forth speedsters from various realities to help them. As Thawne escaped after getting struck by a lightning and hearing Wally, the kids made a plan to send the Legion of Zoom back to their time by creating a shockwave frequency to do so. Jay, though reluctant, was persuaded by Max to let them do what they wanted. covered them along with the other older speedsters.[14] The Flash finally ended the threat of Thawne by grounding him and giving him part of his speed force, which removed his state of being a paradox that could avoid changes in the timeline.[11]

The world was soon transformed to a nightmarish landscape when the Batman Who Laughs conquered Earth 0 with the help of Dark Knights and was granted power by Perpetua to rule over it as he saw fit by Perpetua, in return for helping her. Jay and the other surviving JSA members guarded the Valhalla Cemetery where deceased JSA members were buried. Barry knew where they were and kept in contact. When Wonder Woman came looking for Batman, whom they had allowed in to recruit his undead army, he also reunited with Wally.[9]

When the Robin King later came to cemetery, they realized the Batman Who Laughs had become immensely powerful and he along with Wally as well as Barry ran through a portal created by Doctor Fate. The Batman Who Laughs, who had now gained Doctor Manhattan's powers, chased them and nearly caught up to them since the Speed Force had grown weak. The three speedsters then combined their powers to outrun him.[15]

During the final stand against the Darkest Knight's army, Jay faced various villains, including a Nazi version of himself from the Last 52 Multiverse.[16].

Later that day, along with Barry, Jay fought against a Last 52 version of Wally West, who still possessed Doctor Manhattan's powers, and was killed by its blue lightnings. However, after the Hands restored Earth 0 to its Pre-Metalverse state, Jay was resurrected along with the other people killed during the invasion.[17].

Retrieved from "https://dc.fandom.com/wiki/Jason_Garrick_(Prime_Earth)?oldid=2854558"
Community content is available under CC-BY-SA unless otherwise noted.