I can't change who I am, Bruce. I tried, and look where we are now. What makes you think next time will be any different?

Jason Todd was the second person to take up the mantle of Robin and a sidekick to Batman. Sometime after his presumed death, he took on the identity of "Red Hood". 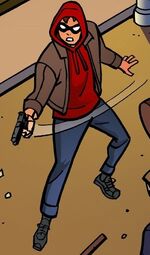 Jason Todd was an orphan whose life had already been full of hardships before he met Bruce Wayne, who was the vigilante Batman. His brother Danny had fallen in with a street gang named the "Wolves", whose psychotic leader Alpha made new members take an initiation rite, which was to be on the lookout for the police. Danny did so but fell to his death after the fire escape he was on collapsed. Batman had seen this and went after the Wolves, but was already beaten to the punch by Jason, who had come to their hideout to take revenge. Bruce was impressed by him fighting everyone there, but stopped him from shooting at them.[1]

Batman was an inspiration to Jason since he was someone he could relate to, and his room's walls were filled with pictures of him along with his allies as well as villains. Bruce later decided to take him in and soon started training his sidekick, especially since he had felt lonely after Dick Grayson leaving. Bruce's butler Alfred Pennyworth and vigilante partner Barbara Gordon (Batgirl) however believed it was premature, also noticing that Jason seemed very violent. Alfred brought this up and also stated that Jason seemed obsessed to be a Robin, but Batman denied there was anything to be concerned about, stating he knew he realized that only Batman can consider him ready for the role. One night however, Jason followed Batman without his permission when he went after a bunch of criminals and helped him fight a group of criminals that included Firefly.[1]

Though Batman and Jason were successful in defeating them, Batman became furious at Jason which led to a heated argument between the two at the Batcave. Alfred intervened, telling them to stop or simply give up being crimefighters. Jason told Bruce that he was not like Dick and just wanted to earn his trust. Batman agreed to officially make him Robin.[2]

Batman and Robin became an effective crime fighting duo, but Jason showed a penchant for violence, making the supervillains suffer both psychologically and physically. When the Scarecrow struck Gothamites with fear using an inaudible frequency, Batman, Batgirl and Jason attempted to stop him. Jason ripped Scarecrow's mask off, paralyzing him in fear and throwing him off the GCN building. Batman criticized him for nearly killing him, though Jason stated that they'll be better off without such people and it will send a message to their rogues gallery. When Alfred later confronted Bruce about it, the latter admitted he knew that Jason was deliberately acting this way. The young vigilante however felt betrayed after hearing this and ran off with his Batcycle.[2]

Jason struck out on his own and started brutally beating up any criminals he encountered, though he would be far more sparing to ordinary criminals than Batman's rogues, whom he showed no mercy. His most brutal fight occurred with Killer Croc, who was trying to steal equipment from a battleship docked at Gotham Harbor. Jason gunned him down with an automatic rifle, but Croc survived after falling into the sea. Jason's violent rampage however was negatively impacting the image of both Batman and Commissioner James Gordon, who realized it needed to be stopped. He finally decided to strike at the Joker, about which Bruce learnt from Sid the Squid. Jason later ambushed Harley Quinn who had pretended to break up with the Joker and asked her to help him take down her ex-boyfriend. She pretended to agree, giving Joker the opportunity to subdue him with a high voltage shock from behind using his joy buzzer.[3]

Joker took Jason to his hideout and stated that leaving him alive would ensure Jason would kill off Gotham's criminals sooner or later. He then started beating him to death with a crowbar and ordered his henchmen to take Harley away when she asked him to stop. Batman however soon arrived and told him to stop, but Joker instead gave his gang the orders to shoot, forgetting that the hydrogen in the tanks lying around was combustible. As the tanks exploded, Joker was buried under his car and Batman released Jason from his restraints. He requested him to kill the clown in revenge, stating he was dying, but Bruce instead rescued the Joker. Jason tried stopping him, but fell over some tanks which soon exploded. Batman escaped with Joker and unsuccessfully searched the wreckage for him. This continued for months, till he accepted Jason was dead.[4] Jason however had survived, grabbing a stray parade balloon to escape.[5] 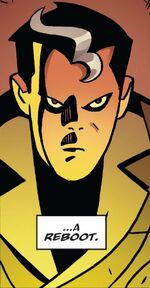 Four years later, Jason returned to Gotham City and started stalking both his fellow Batman Family members as well as members of their rogues gallery, in order to carry out his plan for revenge.[1] While spying on Deathstroke and his partner, Sunny, Jason discovered that they were in cahoots with Lex Luthor to assassinate Batman.[6] He slipped a message to Barbara, warning her that Slade was leading Bruce into a trap.[7] Later, Jason would visit the carnival The Joker was hiding in, but not without being noticed.[8] He was cornered by Joker and his henchman called Straightman, who seemed superhumanly strong and invulnerable. Luckily for Jason, Joker opted to escape rather than finish him off.[1]

Batman after finding out that the Bat-Family's stalker had been Jason all along, went after him[1] and found him at the old hideout of the Wolves where they first met. His former protégé explained that he had been had decided to discover his inner-self after his near-death inexperience and showed that he had now taken up the identity of Red Hood, based on the mask Danny was made to wear by the Wolves. As he promised to catch Joker soon and to go after the other villains as well, Batman asked him to come back with him to the Batcave. Jason refused and stated he could be extremely careless while trying to hold on to those he loved, pointing out he ignored that the abandoned hideout was stocked with filled-up whiskey bottles which smelt of gasoline. He proceeded to escape after firing at the bottles to create an explosion.[2] 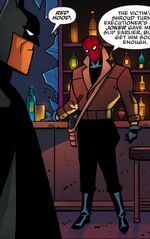 Jason later went to the Wayne Manor disguised as Batman, and when Alfred finished telling the new Robin Tim Drake his story, came down to the Batcave. He stated that what Joker did to Jason was his greatest mistake, but promised he wouldn't let it happen to anyone again. Tim upon hearing this realized he was a fake, as the real Batman would never apologize, and proceeded to toss him over. Jason commended him for seeing through his act and was soon attacked by Alfred, but dodged the bolas he fired at him before knocking him out with a Batarang. Tim rushed at him in anger, which he utilized to beat him up. After he fell unconscious, he dragged him upstairs.[4]

Jason later reunited with Dr. Leslie Thompkins, who had treated him kindly in his younger days, while stealing medicines from her clinic. She asked him to stop, but he shoved her aside and stated he needed it for saving lives. Batman after receiving a call from her, used the Batcomputer to find all locations he had been spotted in past, and went in search for him along with Batgirl. Red Hood later barged into the Iceberg Lounge, after Straightman finished knocking out Mr. Wing, the Penguin's henchman. He used a dart gun to knock out Joker and then fired a hail of darts at Straightman, before knocking him over to the iceberg. Jason then used a grenade to make the chandelier fall at him, resulting in his death. Before leaving with the Joker he told the Penguin to inform Batman that Red Hood had come by. When Batman was later leaving the Iceberg Lounge, Jason knocked him and Batgirl out with darts.[9]

Taking the unconscious Batman to his hideout in the sewers, he forced him to make a choice between killing the Joker in the same way the clown tried killing him years ago, or watching Tim drown. Batman however refused and secretly told Tim to create pressure in the pipe Jason was using to drown him in a tank. Jason shot Joker's arm when he tried escaping after freeing himself, before handing him a gun so Batman may have to fire in self-defence. The clown however sent a homing signal to Straightman, who soon bust in through the floor before grabbing Red Hood and getting attacked by Batman after Tim freed himself. Batman after realizing his attacks had no effect, used Straightman's own strength against him by dodging his punches and causing him to destroy the old pipes carrying water.[5]

As Jason was washed away he struck the crowbar into the wall to avoid falling. Batman and Tim tried rescuing him, with Bruce telling him to come back with him to the manor. Jason rejected stating he'll eventually turn violent again and unhooked himself of the crowbar and told him to rescue Tim who could still be saved. Batgirl was later unable to find any trace of Jason, but he was rescued by Deathstroke and Sunny, with the former telling him that he would make a fine new recruit and could find a home amongst them.[5]

Retrieved from "https://dc.fandom.com/wiki/Jason_Todd_(DCAU)?oldid=2805789"
Community content is available under CC-BY-SA unless otherwise noted.