I'll say this for you, kid... you've got taste. You remind me of someone I used to know-- a long, long time ago.

Jason "Jay" Todd was the second Robin, the sidekick to Batman who succeeded Dick Grayson.

Jason Todd was the son of circus acrobats Joe and Trina Todd, who were inspired by the Flying Graysons and worked in the Sloan Circus. The Flying Todds were introduced to Dick Grayson from the Flying Graysons by their mutual friend, Waldo the Clown. In turn, Dick Grayson introduced the Todds to his guardian, Bruce Wayne.[1] The Sloan Circus was being blackmailed by Killer Croc[2] and the Todds volunteered to help Robin find the criminal. Unfortunately, they were killed by Croc, leaving Jason as an orphan. At first, Dick wanted to adopt him, but Bruce had other plans in mind.[3]

Shortly after his parents' deaths, Bruce Wayne took Jason into Wayne Manor, as the kid had learned the secret of Batman and Robin.[4] In an effort to earn Bruce's permission to become his new partner in the likeness of Robin, Jason attempted to help Batman during a confrontation with Man-Bat, but all he managed was to get himself kidnapped by the monster.[5] Jason was eventually rescued by Batman and he played a vital role in Man-Bat's defeat, proving his worth as a partner in combat.[6] Despite his devotion to become Batman's partner, Jason was denied the chance every time.[7] For this reason, Jason decided to run away from Wayne Manor to go back to the circus.[8]

While at the circus, Jason became aware of a crook part of the circus crew[9] and he helped Batman capture the criminal called Chimera. For his assistance in the case, Jason was given the chance to become Batman's new partner.[10] However, Jason was forced to wait longer than he expected and he hurried things by dying his hair black and taking Dick Grayson's outfit to become the next Robin in order to help Batman against the Joker.[11] Batman tried to get Jason to use a different costume and adopt a different identity,[12] but after they defeated Poison Ivy,[13] Jason was given permission by Dick Grayson to use the Robin identity and continue his legacy, as he started looking for a new identity of his own.[14]

Under his new identity as Robin, Jason joined Batman and stopped several criminals including Crazy Quilt,[15] Doctor Fang,[16] Catman,[17] Scarecrow,[18][19] Mister Freeze,[20] and many others.

Unfortunately, Jason was taken away from Bruce by the Child Welfare Bureau after the legal paperwork for his guardianship was overlooked.[21] In a twist of events, Jason was adopted by Natalia Knight,[22][23][24][25] but she allowed him to continue his activities as Robin, since she was aware of the secret of Bruce Wayne. Nocturna became a good mother for Jason and even helped Batman and Robin capture the Mad Hatter. Despite all this, Jason didn't accept her at first,[26][27] not even after they had to team-up to confront the Night-Slayer, who was impersonating Batman.[28] Their collaboration didn't bring them together and Jason was eventually taken back to Wayne Manor by Natalia, who gave up her quest to prove to be a good mother.[29] Shortly after, Jason was officially adopted by Bruce Wayne.[30] 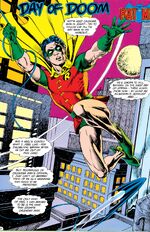 After he returned to live with Bruce in Wayne Manor, Jason resumed his usual Robin activities and helped Batman against various criminals including Darkwolf,[31] Calendar Man,[32] the False Face Society and their leader, Black Mask,[33][34] Mirror Master and Captain Boomerang,[35][36] and Hugo Strange.[37]

Eventually, Jason started feeling the need of a mother figure and he turned to the only woman that after his mother's death had provided him such care and love: Nocturna.[38][39] Later, Robin asked help from Bullock to protect Nocturna from the Night-Slayer, who was still looking to kill her.[40] When Batman became too busy watching over the ailing Catwoman, Robin took it upon himself to protect Nocturna from the Night-Slayer,[41] but despite his best efforts, Nocturna was seriously wounded by the Night-Slayer, which grieved Jason deeply[42] as he felt responsible for her apparent demise.[43]

After such traumatic events and thanks to Batman's efforts, Jason became closer to Catwoman as he found a bit of the relief he sought in Nocturna in Selina Kyle.[44] In some of Robin's last missions, he helped Batman capture the Dark Rider[45] and he teamed-up with Bullock to stop the Film Freak.[46][47][48] Afterwards, he learned that Two-Face had escaped from Arkham Asylum[49] and worked with Batman to stop the villain,[50] even after neglecting his duties as Robin for his new girlfriend, Rena.[51] Realizing the truth, Jason came to his senses and resumed his role as Robin.[52] On his last mission as Robin, he assisted Batman in defeating Ra's al Ghul and many other criminals, who were released to kill Batman.[53]

After the events of the Crisis on Infinite Earths, Jason Todd's existence and history was completely altered, transforming him into a different person, existing in a different reality.

Retrieved from "https://dc.fandom.com/wiki/Jason_Todd_(Earth-One)?oldid=2829538"
Community content is available under CC-BY-SA unless otherwise noted.