There's far, and then there's too far!

Jason Todd was Batman's second Robin after Dick Grayson moved onto being Nightwing. He would be killed and resurrected, working as an impostor Batman until taking the alias Red Hood. 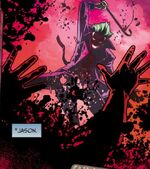 Some time after Dick Grayson graduated from the position of Robin to become Nightwing, Batman brought in Jason Todd to be his replacement. After serious combat training, Jason was active as the second Robin until he was eventually murdered by the Joker. Following these events, Batman would take a third Robin - Tim Drake.

At some point after his death, Jason's corpse was retrieved by the League of Assassins and revived using a Lazarus Pit. Though Todd and the League were mostly dormant during Superman's dictatorial Regime, they crept out of the shadows after his defeat in an attempt to fill the power vacuum.

Jason, under the League's employ, became active again, impersonating his mentor as a new, gun-toting Batman. His first mission involved him abducting the Suicide Squad from the US Government and murdered its leader Amanda Waller for control. 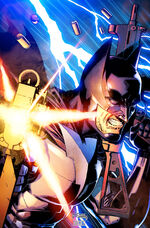 After killing the Squad's more useless members, Jason and the remaining members fight their way out of the Pentagon, where they are confronted by an irate Bruce Wayne. Jason, however, defeats his former mentor with ease and departs back to Ra's al Ghul's base. Jason later accompanies the Suicide in rescuing Damian Wayne from imprisonment, and joins Damian and Athanasia in exhuming the late Alfred Pennyworth's corpse.

When Batman and the other heroes attack al Ghul's base at South America, Jason catches Harley aiding the escape of their hostages and triggers the bomb microchipped into her, only to learn that the Atom had defused her bomb. Jason ends up fighting Wildcat. Although beaten in a fist fight, Todd mortally wounds his foe with gunfire but is unable to land the finishing blow when the child of Black Canary and Green Arrow knocks him out with a sonic wave.

Once al Ghul's wildlife sanctuary is destroyed as collateral from the fighting, Amazo is sent on a test drive to destroy a remote town in Arizona. Jason later questions this decision as the population only contained innocent civilians. Learning that al Ghul's next target would be Delhi, one of the world's most densely populated cities, Jason joins Damian's group in deserting the League and they go to Amazo's creator, Professor Ivo. When Ivo is hesitant to find a way to power down Amazo, Jason reveals that Ivo's family had resisted their escort and were killed as a result. Without his family, Ivo eventually succeeds in weakening Amazo, but Athanasia catches them in the act and wounds Jason before killing Ivo. Jason, Animal Man, Vixen and Damian attempt to escape Gorilla City, but Animal Man is shot dead and Damian is recaptured.

"That. Felt. Good. Titanium composite hollow point bullets with a C4 kicker. Fastest, most explosive ammo in the world. I made them myself. With the invasion over, Bruce and Superman started fighting again. I wasn't down with either of them. On the one hand, the Regime's right. Scumbag murderers and rapists deserve to die. But on the other hand, I'm no fan of government authority. Especially the dictatorial variety.

So while the world's finest fight each other, I fight for the people. The weak. The innocent. Anyone who can't protect themselves. When they cry out for a savior, I'll answer. As for the criminals that threaten them? They need to know that their actions have consequences. That the Red Hood is coming for them.

Retrieved from "https://dc.fandom.com/wiki/Jason_Todd_(Injustice)?oldid=2802794"
Community content is available under CC-BY-SA unless otherwise noted.