Jason Toddler was among the individuals that emulated Robin. He eventually decided he needed to stand out among the plethora of Robins and became Red Hood.

Jason was being babysat by Batgirl alongside Tim Drake when Robin called her to the Batcave. She brought along the two toddlers, who were were impressed with his costume. They raided his storage and each took one of his costumes, with Jason taking a replicate of his usual costume. When Batman returned to the Batcave, he quickly welcomed Jason and Tim to the Batman Family.[1] 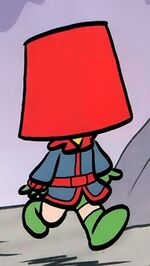 Batgirl and Robin took Jason and Tim to Aunt Harriet's Daycare Center. While there, the pair gave out Robin costumes to their classmates. Robin and his butler, Alfred Pennyworth, picked up Jason and the Tiny Tiny Titans after class and brought them to the Batcave. Tim asked Alfred what kind of costumes he had and he revealed he had a spare leather jacket. He gave it to Jason and Toddler proceeded to take a red bucket to use as a helmet. With these additions to his costume, Jason took on a second alias, Red Hood.[2]

Retrieved from "https://dc.fandom.com/wiki/Jason_Todd_(Tiny_Titans)?oldid=2818094"
Community content is available under CC-BY-SA unless otherwise noted.