Javelin is a German super-criminal and mercenary who has been an enemy to Green Lantern. Beginning his career as an Olympic athlete, he later decided to use his javelin-throwing abilities for evil. His arsenal contains several collapsible high-tech javelins, such as an explosive javelin, a net-containing javelin, or simply normal javelins to impale his enemies with. He has also gone on several missions as a member of the Suicide Squad. Javelin was created by Len Wein and Dave Gibbons, first appearing in Green Lantern (Volume 2) #173. (1984) 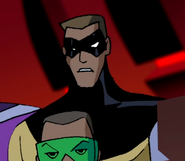 Javelin
TV Series
The Brave and the Bold