Jeremiah Arkham was the director of Arkham Asylum, which was founded by his relative Amadeus. He spent years trying to cure the patients, but it eventually drove him mad, turning him into the second Black Mask.

Jeremiah Arkham was the great-nephew of Amadeus Arkham and the inheritor of the Arkham legacy. Namely, he became the Administrative Director and Chief Psychiatrist of Arkham Asylum. Jermiah's choice of vocation was a matter of destiny and stemmed back to the night that he encountered an escaped lunatic holding up a liquor store. Staring at the man wielding a shotgun, Jeremiah's sharp instincts told him everything he needed to know to get the lunatic to back down. He reassured the man that his father was dead and he no longer needed to look for him. The lunatic understood what Jeremiah was saying, but rather than placing the gun down, he put it to his own chin, blowing his head off. From there, Jeremiah knew that he would spend his days working with the mentally imbalanced.[1]

Jeremiah took a hard line and somewhat unorthodox approach to his patients. He believed that a person's state of mind was immaterial when contrasted against their actions. Thinking about murdering someone was not nearly as interesting to him as the actual act of committing murder. To correct these psychological aberrations, Arkham often utilized aversion therapy with his patients.

Jeremiah Arkham instituted widespread changes at Arkham Asylum beginning with a complete renovation of the hospital grounds itself. Arkham hired the contracting firm of Zolly Hiram to handle the renovations. Unfortunately, Arkham found himself taking advice from one of his most dangerous patients, Victor Zsasz. Zsasz insinuated his way into Arkham's plans and manipulated Zolly Hiram into constructing a secret corridor behind his cell.

Arkham was suitably pleased when the Gotham City Police Department delivered the notorious Batman (Bruce Wayne) to him as a patient following his involvement in an alleged cop-killing. What Arkham didn't realize at the time was that Batman's admission as a patient was all part of a carefully staged plan to keep an eye on him. Arkham secured Batman in a padded cell, but allowed him to keep his costume. It was his desire to "cure" Batman of his violent ways and apparent dual nature, thus enabling Batman to willfully reveal his true identity. Batman escaped however and succeeded in exposing Mister Zsasz and his secret tunnel. Jeremiah Arkham was extremely embarrassed and refused to allow Zsasz to manipulate him any further.[2]

Following the massive Arkham breakout orchestrated by Bane, he was placed in a death trap by Joker. With Batman's help, he managed to escape but he was left psychologically scarred.[3] After recovering, Jeremiah Arkham had little choice but to transfer his charges to Blackgate Penitentiary. There, he clashed against Governor Victor Zehrhard over the treatment of his patients. Zehrhard, who took keen interest in the inmates at Blackgate held great disdain towards the criminally insane and awarded them no special privileges. It was Arkham's idea to bring his patients together as a softball team and pitted them against Zehrhard's prison team. He even entered into a wager with Zehrhard as to the results of the game. Serendipitously, the Arkham softball team proved to be of great therapeutical value as his patients agreed to work together alongside one another in the spirit of competition.[4]

Metamorpho and Grace talked to Jeremiah at Arkham, as they were looking for Batman. Jeremiah knew nothing except that all the inmates were singing a song about Batman and that Joker had delivered a picture of Batman's tombstone to every inmate.[5]

Jeremiah hired Dr. Guy Dax as a prestigious doctor for Arkham Asylum. Dax's first patient was the Joker and not long after this, Dax was assigned the patient Pierrot Lunaire.[6] Later, Jeremiah went to visit some of the inmates in solitary confinement, where he lost his sanity.[7] However, Dax revealed his true intentions by attacking Jeremiah, taking control of the asylum and releasing Joker as part of the Black Glove's master plan.[8] 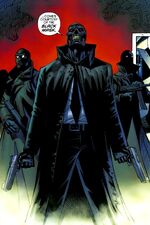 The New Black Mask
After learning of Batman's death, Jeremiah's sanity finally gave in and he took upon the identity of Black Mask, previously used by the criminal Roman Sionis. As the asylum inmates were brought back from Blackgate Penitentiary, Arkham stopped their arrival and destroyed the recently decontaminated asylum in a giant explosion. The inmates, with no place left to go, followed Black Mask's orders as he threatened them with activating an acid implant on their bodies that would kill them. Black Mask took the inmates to the sewers and there, he organized a plan of action for every one of them.[9] After telling them their part on his plan, Arkham just waited until they started creating chaos in Gotham and he basked in the destruction he created.[10]

Shortly after this, Jeremiah's consciousness returned to him and he couldn't remember anything that happened previously. He stumbled his way back to Arkham and found it destroyed, completely ignorant that he was responsible. There, he retrieved some blueprints from his office and freed the three inmates from solitary confinement that were left behind.[7] At this point, it became clear that Arkham suffered from dissociative personality disorder.

Like his predecessor, he also tried to set up a False Face Society, but that never really came off the ground.

Firefly found out about the nanites and burned them out; he subsequently betrayed Black Mask. When the kingpin came to speak to Lynns at his lair, Firefly torched the place, but Batman (Richard Grayson) and Robin (Damian) intervened before Firefly could finish off his old boss. Mr. Zsasz salvaged Black Mask from the debris, and became his prime agent in his new business. Abducting stray children from the streets, they were forced into deadly cage fights. Black Mask gained millions with the betting.

The Black Mask then turned to science to gain the advantage as the top crimelord in Gotham. Using Hugo Strange, Doctor Death and Fright, he psychologically and chemically brainwashed ordinary people into his new False Face Society and covered their faces with gas masks. He used the Society to control most of the Penguin's illegal activities.

Black Mask also seemed to have the same fascination with turning invisible that the original Black Mask did. Like Roman Sionis's funding of Nigel Glass's Tanslux invisibility serum, the new Black Mask also obtained invisibility technology. He obtained an invisibility suit from a Dr. Ketola, whom he then killed. He had a mentally disturbed henchman test the device by going on a killing spree. The henchmen, ran into the Man-Bat who could "see" him with his sonar. The Man-Bat and the Huntress ended up having a confusing battle with each other and the invisible man. Eventually he was apprehended and Black Mask's chance to be invisible was confiscated.

Black Mask's criminal scientists were also able to revive the cryogenically preserved body of the Reaper and control his broken mind with a mixture of anti-psychotics. With his False Face Society being confined to an area in Gotham referred to as Devil's Square by the National Guard, the Reaper became Black Mask's main enforcer in his battle against Batman, and a resurgent Falcone crime family led by Mario Falcone. He is later targeted by the Falcone crime family and the National Guard, thus forcing him to retreat to Devil's Square. Around this time, Arkham and Fright had become lovers. After being defeated by Batman, he is imprisoned in the rebuilt Arkham Asylum. Also, before he is imprisoned, he begins manipulating patients, a plot that culminated, with the revelation of his role as Black Mask and his incarceration in his own asylum. However the new head of Arkham, Dr. Alyce Sinner, who had secretly been manipulating events in Arkham's plot, continues her work for the Church of Crime and allies with him.

Retrieved from "https://dc.fandom.com/wiki/Jeremiah_Arkham_(New_Earth)?oldid=2763640"
Community content is available under CC-BY-SA unless otherwise noted.