You are trying to understand madness with logic. This is not unlike searching for darkness with a torch.

Jervis Tetch is a criminal who operates in Gotham City. He is best known as "The Mad Hatter", for his obsession with the character of the same name from "Alice in Wonderland". Initially a common criminal with a specific theme, Tetch has become mentally unstable in recent times, usually seen at Gotham's mental hospital, Arkham Asylum.

The Mad Hatter started his criminal career in Gotham City by stealing from a very important Yacht Club. During his first crime, he was confronted by Gotham's vigilante, Batman and after a few more encounters with the caped crusader, Hatter was finally captured by the Dynamic Duo with help from the intrepid reporter Vicki Vale.[1]

Following this first encounter with Batman, Tetch was committed to a sanitarium for several years. Meanwhile, an imposter assumed the mantle of "Mad Hatter" and even called himself "Jervis Tetch". Eventually, the real Jervis Tetch escaped and "disposed" of the imposter. He then resumed his Mad Hatter career and during his first crime, he kidnapped Lucius Fox and asked two million dollars ransom from Bruce Wayne. Hatter planned to wipe-out Fox's memories with a machine he created, but his plan was stopped by Batman.[2]

Later, Mad Hatter became part of a large gathering of enemies of Batman and joined their efforts to kill the vigilante. As usual, they failed, but Hatter managed to escape.[3] Free to continue his crimes, Hatter came up with a plan to steal from other criminals and using a special mind-controlling hat, he attempted to drain all the memories from Nocturna in order to steal the loot of her previous crimes. His plan was thwarted by Batman and the new Robin, but once again, Hatter avoided capture.[4] In revenge, Hatter used a large number of hats to control street thugs and sent them out to eliminate Batman. His plan was thwarted by Batman and Robin when they found his hideout and Hatter was finally captured by Nocturna.[5]

Tetch, growing up, never had any friends, due to his appearance. His whole life he has been in love with the works of Lewis Carroll's "Alice in Wonderland" and "Through he Looking Glass" especially the "Mad Tea Party" chapter. In adulthood he became a neural scientist working for Wayne Enterprises where he invented circuitry that can control minds. Jervis lived in a boarding house owned by Ella Littleton. There he befriended Ella's daughter, Connie Littleton, and her friends in her high school. A few years later, Connie became pregnant. Fearing the reaction of her extremely strict mother, Connie lied to her and claimed she had been raped by someone on her school's baseball team. Ella approached Tetch for help and convinced him that the Gotham Hawks were "bad kids". Tetch agreed to use his mind control technology on a member of the team, making him use a pipe bomb to kill the other players. Although this was Tetch's first known criminal act, his involvement in the locker room bombing would not be discovered until years later.

Mad as a Hatter

At one point Jervis lost his mind and becoming obsessive, delusional and schizophrenic he went to crime modelling himself after The Mad Hatter his most loved character from his beloved "Alice in Wonderland" and wielding his vast genius and mind control Tech. He started kidnapping young girls to be "Alices" in his tea parties before selling them to slavery but he was stopped Batman and was arrested. The courts found Jervis insane and sent him to Arkham Asylum.

Despite Jervis's kind facade he was one of the asylums most dangerous inmates, he would be pleasant at one moment and then homicidal at an other. Jervis in attempts to make friends would be kind to the other inmates like sneaking a pet plant to Poison Ivy. Like the other rogues, Tetch managed to escape Arkham on numerous occasions.

When Bane destroyed the walls of Arkham, Mad Hatter went free along with other fellow inmates. He used his mind-controlling hats to possess some thugs that would help him against Batman, but in the final battle at the Gotham Park, Batman and Robin managed to capture all the criminals including Hatter.[6]

Along with Wonderland and controlling people's minds, Tetch was obsessed with headgear and wanted above all else attain for his extensive collection of hats Batman's cowl by any means necessary.

Jervis occasionally allied with other villains in an attempt to kill Batman, using a mind controlling hat on Scarecrow, forcing the villain to fight. When Batman overcomes his attackers, Tetch flees and appears to die on a bridge under the wheels of a train. In actuality, he had escaped by jumping onto a truck that had been passing underneath the bridge. 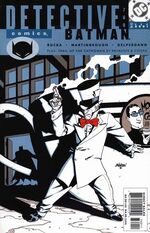 Tetch has even kidnapped Lucius Fox of Wayne Enterprises and held him for ransom. Once again, Tetch was stopped by Batman, but not before using his advanced equipment to feed information from Fox's mind into his computer. Tetch devised a plan to implant his mind control devices in Walkmen, which he gave out to young girls at Dick Grayson's school in order to sell the young girls to the millionaire third-world dictator Generalissimo Lee. The young Robin managed to defeat the Mad Hatter.

One of Tetch's latest plans consisted of implanting his devices in "free coffee and donuts" tickets he handed out in front of the police stations in Gotham. That plan had him controlling most of the cops in the city. He even had Gotham police detectives Crispus Allen and Renee Montoya break into a bank for him.

Tetch was trying to escape Arkham Asylum with the aid of a guard under mind control. The guard fired on police and was killed in return fire. Tetch was also shot multiple times and left in critical condition. It was thought he might have died.[citation needed]

Hatter began working for Black Mask and he aided the crime lord by mind-controlling several girls to work for them and also implanted a mind control chip directly into Killer Croc's brain. Tetch also used the abandoned Iceberg Lounge as a hideout and lured Batman into a trap under Black Mask's command.[7] A few time later, Croc began to mutate again due to the virus that Hush injected into him. Croc freed himself from the mind control and embarked on a quest to get revenge on Tetch. However, Batman arrived in time to save Tetch, only to capture him later.[8]

Afterwards he was approached by Catman, and he joined the members of the Secret Six in opposition to The Society; they recruited him in hopes of a defense against Doctor Psycho's mind control abilities. When Ragdoll attacked the Secret Six under Dr. Psycho's control, Tetch put what he called his "thinking cap" on Ragdoll's head, causing a seizure. After the Six crash-landed, they were attacked by the Doom Patrol, who came close to apprehending the Six until Mad Hatter stepped in and used his mind control abilities to subdue the Doom Patrol single-handedly, going so far as to almost force Elasti-Girl to eat Beast Boy before Scandal stopped him. The Six commented to themselves afterwards that even they had no idea Jervis could do this. It has been revealed that Tetch designed a hat to make him happy beyond what illegal drugs can accomplish. He also revealed that he had planted miniature listening devices around the House of Secrets to keep tabs on his fellow members. After revealing the true reasons why Scandal Savage left the team, the Six went after her, finding themselves at Vandal Savage's temple in the mountains, where Doctor Psycho started attacking. Tetch was about to get the upper hand on Doctor Psycho when Cheshire stabbed him in the back with a poisoned dagger. Scandal tended Hatter's wound and Catman administered an antidote. While the Six faced off against Cheshire and Vandal Savage, Hatter took on Dr. Psycho one on one, and emerged victorious despite his injuries, possibly killing Dr. Psycho with Cheshire's dagger. Hatter saved Scandal from falling to her death, and the Six told Tetch that they were his friends, something Tetch has never had. As Hatter stood atop Savage's destroyed base with Ragdoll, he expressed deep happiness and excitement about having friends. He said to Ragdoll that he will be a very good friend in return. Ragdoll then pushed Hatter off the roof, seemingly to his death, saying there's only room for one dandy freak on the team. Miraculously, Tetch survived the fall. Heartbroken, he vowed revenge on the rest of the Six.

Tetch fell victim to his own mind control devices at the hands of Tweedledum and Tweedledee. The two forced him to "lead" a gang of Wonderland-related crimes through various gimmicky heists before Batman deduced the Tweeds to be the true masterminds. Once the three were returned to Arkham, the Hatter quickly exacted revenge on the two, manipulating them into a bloody brawl with his mind control chips.

Mad Hatter hired the Six to break Tarantula out of Alcatraz, to deliver her as well as a "get out of Hell free" card created by Neron to Gotham City. Doing this put the Six directly in the cross hairs of Junior, Ragdoll's psychotic sister. Junior believes that the Neron Card is key to saving her soul from eternal damnation, and will stop at nothing to reclaim it from Tarantula and the Six. It seems that Junior's wrath is not the motivation behind Tetch's hiring the Six to perform this mission. He has made it clear his intention is to ensure the Six safely reach Gotham. The story is ongoing, and the Hatter's full plan has yet to be revealed, although it is made clear in the same issue that Tetch intends to murder each member of the Six as part of his revenge. Tetch observes as the Six battle Junior and his goons on Gotham Bridge and when the battle ceases he confronts them, telling them how they betrayed him. Ragdoll throws Tetch's hat over the edge and Tetch jumps off after it.

Tetch next shows up, seemingly uninjured from his battle with the Secret Six, working with The Penguin, who is planning on killing the new Black Mask. He assists Penguin in attaching a mind control device to a gas mask, which is placed on Batman's head to turn him into a puppet to assassinate Black Mask. The plot fails, and Batman recovers before killing Black Mask. Following this, Tetch is shown once again incarcerated in Arkham. He hires Deathstroke and the Titans to free him, and escapes just prior to a massive prison riot.

Retrieved from "https://dc.fandom.com/wiki/Jervis_Tetch_(New_Earth)?oldid=2795741"
Community content is available under CC-BY-SA unless otherwise noted.