I almost died fighting alongside the Justice League. I lost one ring... Then I got another. Even though there's already something like four Green Lanterns from Earth. But why?

Jessica Cruz went on a hunting trip with her friends and unfortunately came across mobsters who were burying a body. Unwilling to have witnesses, the mobsters shot and killed Jessica's friends while Jessica herself managed to escape, but was extremely traumatized by the incident. Jessica developed debilitating anxiety and locked herself in her room for 4 years.[1][2]

During the Crime Syndicate's rule, she was unwillingly chosen by the Ring of Volthoom, after its former bearer, Harold Jordan of Earth 3, was killed by Sinestro. Unlike the ring's predecessors, the ring forced itself upon Jessica and took over her body. Under the influence of the ring, she attacked her home town and was confronted by the Justice League and Doom Patrol. Through the intervention of Batman, Jessica was able to overcome the ring's influence when he told her that he was a victim like her and that finding strength, even at their worst moment of despair, will overcome their fears.[2]

Allying herself with the Justice League, the Flash called in Hal Jordan, Earth's first Green Lantern, to teach Jessica how to stay in control of her ring. With Hal's help, Jessica mastered the use of the foreign ring.

When Darkseid's daughter Grail arrived on Earth, she attacked Jessica and used her ring to summon the Anti-Monitor to fight her father.

Thinking of ways to stop the fighting between the Anti-Monitor and Darkseid, Jessica helped Mister Miracle break out the Crime Syndicate in order to fight the rampaging monsters. The ring being in close proximity to the Syndicate however overwhelmed Jessica, and the being inside the ring possessed her body and mind.

When Grail summoned the Black Racer, the New God of Death, to kill the Flash, Jessica maintained enough control of her body to jump in the path of the Black Racer and seemingly kill herself to save the Flash. The Black Racer though, managed to kill the entity in her ring controlling her, causing her Power Ring to crumble apart on her finger. For her ability to overcome fear, Jessica was then tracked down and bestowed a Green Lantern Ring, becoming Earth's newest Green Lantern.

After the Darkseid War, Jessica was kicked out of her apartment and, at the orders of Hal Jordan himself, to test her and another new Earth Green Lantern Simon Baz, which they failed due to their lack of teamwork. Simon started blaming her and the two got in an argument. Before it got serious, Hal stopped them & made them summon their power batteries. He combined their power batteries into one, making them partners. They had no choice but work together as a team.[3] 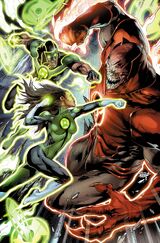 Jessica and Simon against Atros
Even though she had become an official Green Lantern, she was struggling to get the hang of her powers and her anxiety was not making it easy for her. Simon was unhappy being stuck with her. The situation got even worse when Red Lantern Corps attacked Earth to make it their new world full of rage. Jessica was with her sister Sara Cruz when they got attacked and the Red Lanterns filled her sister with rage. Simon rescued her, causing more tension between them. She returned the favour to him later but it was revealed that she had gotten in his way of curing the Red Lantern Bleez. They try their best to not make any more mistakes but things got even worse when she got infected by rage. They fell into the surface of the Earth and Simon tried to cure her as he did the Red Lantern earlier. This time he succeeds and he encourages her to help him fight off the Red Lanterns. However she got a panic attack in the middle of the battle. She did her best to control her negative thoughts and stay aware of the anxiety that was causing her panic. She started to fight with her fears and her willpower increased when she formed her first construct during doing so. She helped Simon to take down the Red Lantern leader Atros. After that, they finally got along and accepted each other as partners. Later as they arrived at Simon's house, a Guardian of the Universe was waiting for them. He demanded that he needed to see Hal Jordan 'Legendary Green Lantern of sector 2814'. But Hal was in space not answering their calls. The guardian revealed himself as Rami the rogue guardian and he was the creator of the Phantom Ring.[4]

Simon and Jessica joined Justice League by order of Hal Jordan, at some time.

Halloween and then Phantom Lantern

It was Halloween and Jessica was having a hard time fighting her social anxiety to hang out with Simon's family. She even tried to run away but Simon stopped her before she found Darkseid and saw what he was doing for dinner. Simon promised her if she helped him make cookies, she doesn't have to make small talks with his family. By the time they were done Guardian Rami was missing and they went to find him. They finally found him after knocking about 28 doors, unfortunately, he was freaked out and ran away again. Next time the Lanterns were not going to let him go as easily, they chased him and caught up to him. When they were comforting him they got attacked by aliens called Dominators who wanted the Phantom Ring for themselves. Simon and Jessica were able to take them down and protect the phantom ring. And finally, Rami explained about Phantom Ring and how it was most dangerous weapon in the universe.

"In brightest day, in blackest night,
No evil shall escape my sight.
Let those who worship evil's might,
Beware my power...Green Lantern's light!"

Retrieved from "https://dc.fandom.com/wiki/Jessica_Cruz_(Prime_Earth)?oldid=2804707"
Community content is available under CC-BY-SA unless otherwise noted.