Jo Nah aka Ultra Boy, hails from the planet Rimbor, is a member of the Legion of Super-Heroes possessing a multitude of powers. However, due to physical limitations, he is only capable of using one of these powers at a time.

He was born on the seedy world of Rimbor and ran with a gang called the Emerald Dragons. Jo was traveling in his Space-speedster when he was swallowed by an Energy-Beast, a giant whale-like creature. They will eat any life-form that happens to fall in their path. Luckily a Galactic Patrol Cruiser saw this and rescued him by slicing the creature open with a ray.

Jo Nah escaped, but his body was charged by the radiation of the beast. He discovered that he could see through anything, even lead. Jo Nah now had various powers, but he could only use it for one super-power at a time. He decided to use these abilities to help law enforcement, earning him the name Ultra Boy and a recommendation to join the Legion of Super-Heroes.

As part of his initiation, Jo Nah traveled with Marla Latham to the 20th Century to learn Superboy's secret identity. Upon success, Ultra Boy was inducted into the team.

He is romantically involved with fellow Legionnaire Phantom Girl. The two began a long-term romance shortly thereafter. Jo Nah often worked alongside Mon-El and Superboy as the Legion's Big Three for their power levels and Jo was once possessed by the spirit of Nero because of it.

Jo Nah later served two terms with the team as the leader. Following his stint as leader, Jo Nah was on the run a second time when he was framed in the murder of his ex-girlfriend, An Ryd. Jo Nah managed to find the real killer, Pulsar Stargrave, but was defeated and believed dead by his hand. In actuality, Jo Nah had been blown through time all the way back to the 20th Century.

He found Superboy and merged minds with him to become Reflecto and returned to the 30th Century. Jo Nah campaigned again for a time as leader but lost and became the deputy to Dream Girl. The coalition did not work and Jo Nah quit. 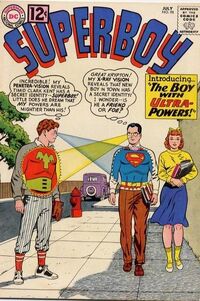 The boy with ultra powers!

Retrieved from "https://dc.fandom.com/wiki/Jo_Nah_(Pre-Zero_Hour)?oldid=2760675"
Community content is available under CC-BY-SA unless otherwise noted.