Without Batman, crime has no punchline.

The Joker is the Clown Prince of Crime. A deranged and disfigured psychopath, he was the archnemesis of Batman. Even decades after his death, his name was still an inspiration for a maniacal and nihilistic gang, the Jokerz.

Before becoming The Joker

Joker was an nameless crook who started as a young enforcer. He began his criminal career working for the mob triad of Sal Valestra, Buzz Bronski, and Chuckie Sol. Before his future accident, he and Bruce Wayne caught a glimpse of each other. One of his last jobs was to kill Carl Beaumont, a businessman who had fled the United States after the mob bosses discovered he had embezzled a fortune.

Years later, the crook formed his gang and staged their first robbery at the Ace Chemical Plant in 1992. It was during this heist that he first encountered the superhero, Batman. During the ensuing fight, he fell off a catwalk and into a drainage vat of chemical waste that washed him out into the river. It is unknown whether the crook was pushed or simply fell. The chemicals gave him a clownish look; dying his hair green, bleaching his skin white, and staining his lips permanently red. This pushed the crook over the edge into complete insanity and allowing him to adopt the alter-ego of the Joker. Vowing to show the world the triumph of his comic genius, the career of one of history's most dangerous and intelligent psychopaths began.[citation needed]

The Clown Prince of Crime

After his transformation, he planned various schemes from small-scale crimes to global conspiracies. During Christmas Eve, Joker escaped from Arkham Asylum, kidnapped Commissioner Gordon, Summer Gleeson and Harvey Bullock.[1] As an April Fool's celebration, Joker spread his trademark laughing gas across Gotham, incapacitating and stealing from the entire city.[2]

Joker also infiltrated Mayor Hill's home and created chaos. Hill's son followed Joker to his hideout, and Joker used the kid to lure Batman into a trap. However, on the last battle, Joker fell in the river and disappeared from the place.[3] On one occasion, Joker tried to con his way to a local comedy trophy by using the Mad Hatter's mind control chips on the event's judges.[4] Later, he stole a nuclear warhead and almost successfully set it off on the residence of Mayor Hill[5] and he also set out to destroy a casino that was built by ripping off his image.[6] On most of these occasions, he was stopped by Batman.

A frequent inmate of Arkham Asylum, the Joker was often psycho-analyzed by Dr. Harleen Quinzel. During these sessions, the Joker manipulated Dr. Quinzel's emotions by painted himself as a misunderstood soul crying out for the world to accept him. Quinzel soon found herself in love with the Joker and broke him out of Arkham Asylum using the alter-ego of Harley Quinn. However, their relationship was very abusive and the Joker frequently mistreated Quinn.[7]

The first crime they pulled together as a team was the attempt on Commissioner Gordon's life during an event on his honor. This plan, however, was foiled by Batman who captured them both.[8] Afterwards, Joker attempted to copyright fish with his face and tried to murder the people who denied his wish. Rather than being captured by Batman, Joker chose to drop into the sea, where he was presumed dead by a shark attack.[9]

Joker resurfaced in the criminal underworld when he learned that somehow, Batman had been killed by a small-time crook called Sid the Squid. Joker used his influences and gathered his gang to capture Sid to learn if Batman was truly dead. Batman, however, was simply hiding and Joker (assuming Sid was guilty), tried to kill the man. But eventually, Sid was saved by Batman, who allowed Joker and Harley to remain free.[10] Joker and Harley later attempted to steal a valuable diamond from the Gotham Museum, but their plan was foiled by Batman. In a fit of anger, Joker threw Harley to the streets, which forced her to start an alliance with Poison Ivy. Joker learned of Harley and Ivy's success in crime and tried to put an end to it, only to end up captured by Batman and returned to Arkham.[11]

Schemes Outside of Gotham & Attacking the Justice League 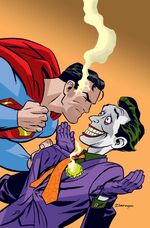 The Harlequin of Hate battles the Man of Steel

The Joker occasionally operated outside of Gotham City mostly due to a lack of financial stability. One such instance caused him to travel to Metropolis, where he briefly allied himself with Lex Luthor to kill Superman for one billion dollars. The Joker planned to use the Laughing Dragon, a statue made of Kryptonite. The Joker's plans fell apart when Batman deduced what the antique was made of and headed to Metropolis. After failing to defeat either Batman or Superman, Joker decided to consolidate his losses and kidnap Luthor using an experimental LexWing assault vehicle. While the Joker was presumed dead after grenades exploded the plane, he survived and returned to Gotham a month later, still bankrupt.

Another plan involved the Joker heading to Dakota City. The Joker planned on forming a metahuman gang. Batman, Robin, and Dakota's resident hero Static, teamed up and escaped the Joker's death trap, arresting the Clown Prince of Crime in the process. Months later, the Joker conned his way into Lex Luthor's Injustice Gang by providing his expertise on Batman. His one condition was that after the Justice League was successfully destroyed, the Joker could kill Batman. However, the League survived went after the Gang, the Joker failed his attempt to kill Batman.

The Joker, later on, made use of a team of metahumans called the Royal Flush Gang to run as interference while the Justice League attempted to defuse his bombs set up all over Las Vegas. However, while the Joker was televising this event by pirating the airwaves, he was using the Royal Flush Gang member Ace, who by her unyielding catatonic stare can manipulate people's minds to the point of driving them insane, to make viewers lose their minds. Joker told the viewers that he was immune to Ace's influence because he was already insane, but Batman revealed that he had a neural-blocker headband in case Ace decided to turn on him. Upset, Ace then exposed Joker to her mind-manipulating powers to incapacitate him.

Years later, between 2005 and 2007, Joker's committed his final act of cruelty by kidnapping Batman's partner Tim Drake with the help of Harley Quinn. He used shock treatments and serums stolen from Project Cadmus to extract secrets about Batman from him. He also used genetics technology to remake Tim Drake into "J.J.", a child-sized replica of Joker as his and Harley's son. In the resulting battle where Joker revealed he knew everything about Bruce, J.J. arrived and almost killed Batman when the Joker had him on the ropes. Tim Drake instead killed the Joker. How depends upon which version of the movie Return of the Joker. In the censored version meant for television, Tim threw the gun, which is filled with Joker Gas, to the side and fought the Joker pushing him into a portion of the lab. Here Joker crashes into several canisters of chemicals and is wrapped up in wires. He slips on some of the chemicals and falls, pulling a switch, therefore electrocuting himself. In the uncensored version, Joker subdues Batman with a knife to the knee and gives Tim a gun armed with a rocket-propelled Bang Flag. Using the last of his free will, Tim shot the Joker, whose dying words were: "That's not funny." Tim finally broke down and cried, comforted by Batgirl. According to Barbara, who was telling Terry the story, the only other people who knew what happened were her father and Leslie Thompkins, who worked for a year to restore Tim. After Tim's recovery, he was forced to retire his role as Robin.

Return of The Joker

Tim as an adult later in life worked for a communications company, though he was still under the influence of the chip Joker had installed on him that changed him from Tim Drake into the Joker. During a confrontation with Terry McGinnis, the new Batman destroyed the chip with the Joker's electronic joy buzzer, restoring Tim Drake to normal.

Retrieved from "https://dc.fandom.com/wiki/Joker_(DCAU)?oldid=2785155"
Community content is available under CC-BY-SA unless otherwise noted.